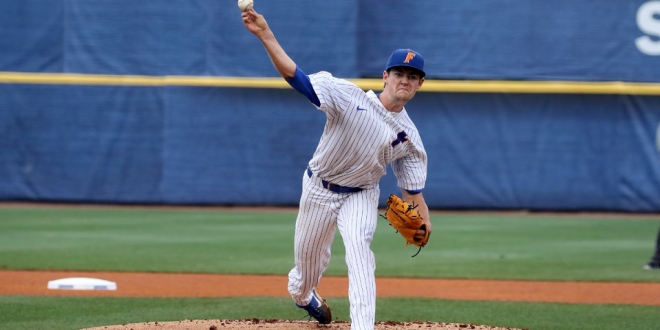 No. 3 Florida Baseball Rallies to Squeak Past LSU

The Florida Gators (42-15) opened SEC Tournament play in Hoover, Alabama Wednesday night with a 4-3 victory over the LSU Tigers (34-24). Florida rallied from an early three-run deficit and won despite committing four errors.

The Tigers got on the scoreboard first in the top of the second inning. After senior Beau Jordan reached on a Blake Reese throwing error, sophomore Jake Slaughter homered to left field to give LSU a 2-0 advantage. They added another run in the third via a Daniel Cabrera RBI single.

Florida starter Tommy Mace settled in after giving up the early runs and did his best to limit the Gators’ self-inflicted damage. He worked four additional scoreless innings after the third.

In the sixth, Mace worked out of a jam created by two Jonathan India errors. The freshman surrendered just the three runs (one earned), struck out four and walked only one over seven innings of work.

Florida had an answer for the early LSU momentum in the bottom of the third. Deacon Liput gave the Gators their first run when he doubled home Nick Horvath. Cal Greenfield, who had advanced to third on the double, then scored on a Nelson Maldonado RBI groundout. India capped the rally with an RBI single through the left side. Liput scored on the play and the Gators tied the game at 3-3.

The go-ahead and eventual game-winning run came in the fifth when Austin Langworthy hit a two-out RBI single up the middle to score India.

Langworthy with a two-out, RBI single and India scores from third.

After Mace’s stellar start, head coach Kevin O’Sullivan turned to Jordan Butler in relief. He managed to get only one out after giving up a walk and a base hit. Michael Byrne worked out of the jam created by Butler and picked up his 13th save of the season while preserving the Florida lead.

Florida now moves on to face No. 4 seed Arkansas in the fourth round at 9 p.m.

I'm an above-average golfer with surprisingly great touch around the greens. Click on my twitter link for some sports talk.
@Ry_McGinn
Previous Bolts, Caps meet with Stanley Cup appearance on the line
Next Florida Tennis Begins NCAA Tournament