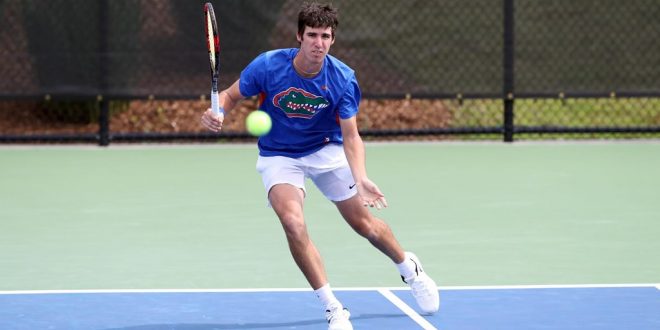 The completion of Day 3 in the NCAA Men’s tennis tournament has been revealed for men’s tennis. Here’s all the recap news for you down below.

The Florida team finished strong in team play but just short of making it to the semifinals. They swept South Carolina State in the first round, swept the University of Miami in the following round, but couldn’t handle Texas A&M in best of seven series as they lost 4-3 in the Quarterfinals. Texas A&M eventually lost in the semifinals to the current national champion Wake Forest.

Furthermore, Cuban native Alfredo Perez has made his third straight round of 32 appearance. His freshman year he reached the round of 32 but lost to Petros Chrysochos from Wake Forest. He had his longest tenure in the tournament last season, reaching the round of 16 until getting knocked out by William Blumberg from UNC.

Perez defeated his first round opponent Ohio State’s J.J Wolf in two sets 6-4, 6-4. Perez was the only gator to make it out of the first round this season but met his match against the 3rd best seeded player in the tournament, Nuno Borges from Mississippi State. The match ended in two sets, Borges winning both in 7.

A surprise outing came from freshman Duarte Vale and junior McClain Kessler in their first Doubles Championships together. They faced TCU’s powerhouse duo of Guillermo Nuñez and Alex Rybakov.

The two teams went blow for blow when they split two sets evenly  6-3, 3-6. Kessler and Vale won the final tiebreaker situation to advance to the Round of 16. The pair met with senior Christian Langmo and freshman Adria Soriano Barrera of Miami today at 1 p.m. and came out victorious.

Kessler and Vale had an evenly matched opponent in Langmo and Soriano Barerra. Both sets ending in tiebreak wins for Florida. Now the duo will move on to the quarterfinal stage and play against Ohio State’s Martin Joyce and Mikael Torpegaard tomorrow, May 26.

Recent grad from the University of Florida. Editing all articles on here while helping out the newbies. Love all things basketball.
@@MarcoJMartinez_
Previous A Grand Slam Seals Arkansas Win Over Florida
Next Gator Softball Drops Game 2 Against Aggies in Super Regional