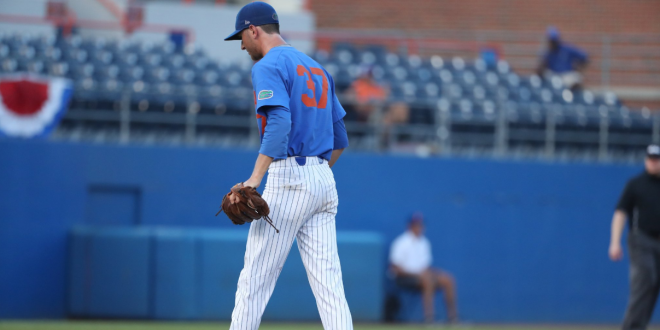 The Florida Gators (44-18) lost a potential regional-clinching game Monday night to the FAU Owls (43-18-1) by a score of 7-4. Florida will now participate in a winner-take-all regional final game for the second consecutive season.

After working scoreless first and second innings, Florida starter Jackson Kowar ran into trouble in the third. He opened the inning by giving up back-to-back singles and then Wil Dalton committed an error while attempting to catch a fly ball to right.

Following the error, FAU senior David Miranda hit a two-RBI single to left field that scored Andru Summerall and Tyler Frank. In the next at-bat, sophomore Eric Rivera singled through the left side to plate Cody Wilson. Kowar then issued a four-pitch walk to load the bases. Junior Joe Montes continued the rally with a two-RBI single through the left side to give FAU a 5-0 advantage.

The Gators countered in the following frame when Blake Reese connected on a two-run home run to right field. However, Kowar gave the runs right back in the bottom of the fourth. Montes picked up another RBI on a sacrifice fly and Jared DeSantolo made the score 7-2 when he hit a RBI single to left.

The Gators picked up their third run in the top of the fifth when Nelson Maldonado singled home Nick Horvath. Kowar exited the game in the seventh after managing to pitch a scoreless sixth. After allowing the leadoff hitter to reach in the seventh, Andrew Baker took over in relief. He pitched two scoreless innings.

Deacon Liput hit a solo home run to right in the ninth inning to cut the deficit to 7-4, but the Gators failed to push across any more runs.

OWLS WIN!!! They will force a deciding game here tonight against UF, start time of 9:45 p.m. to determine the Gainesville Regional champion!! pic.twitter.com/AqRbx6xZWb

First pitch for the winner-take-all matchup between the Gators and Owls is set for Monday night at 9:45 p.m. at McKethan Stadium. Freshman right-hander Jack Leftwich will get the start for Florida. You can listen to the game via ESPN 98.1 FM & 850 AM WRUF. It will also be televised on ESPNU

I'm an above-average golfer with surprisingly great touch around the greens. Click on my twitter link for some sports talk.
@Ry_McGinn
Previous FSU Advances to the Women’s College World Series Championship
Next Gator Baseball is Super Regional Bound