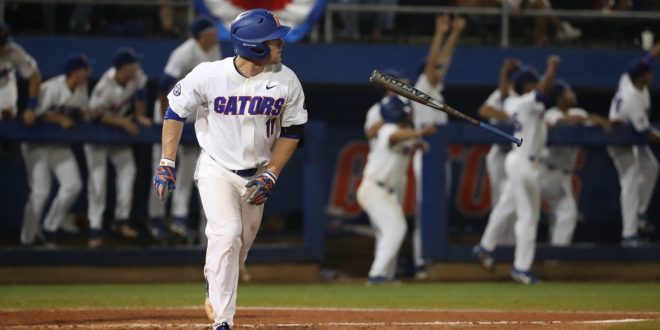 It was a late night in the ballpark as the Florida Gators baseball team defeated the Florida Atlantic Owls 5-2 and advanced to the Super Regional. The Owls won the first game between the two on Monday 7-3, forcing a winner-take-all second game.

The second game didn’t start until 9:45 p.m. and didn’t end till 1:18 a.m. Jack Leftwich started on the mound for the Gators and had a bit of a rough start giving up three walks and two runs in just the first inning, but he turned it around and ended the night with eight strikeouts. The Gators took control of the game with three homers over the fourth and fifth innings. FAU ends their year with a great 43-19-1 record.

To start things off in the first inning, Leftwich walked FAU’s Tyler Frank and David Miranda. Then on a passed ball, Frank advanced to third. Next, Eric Rivera walked moving Miranda to second. Gunner Lambert then hit a one-out single to left field scoring both Frank and Miranda. This put the Owls on the board 2-0.

In the third inning, Florida got on the board.  Jonah Girand walked and one out later Nelson Maldonado hit a double up the left field line, which advanced Girand to third. MLB first-round pick Jonathan India then singled to left field and scored Girand, which made the score 2-1 Owls.

In the fourth inning, Florida took the lead on a two-run homer by Girand who plated Nick Horvath who got on board with a base hit.  3-2 Gators.

The fifth inning saw the Gators score two more runs, thanks to back to back homers from India and Wil Dalton, the second time they accomplished the feat in the regional.  Both India and Dalton have 19 homers this year.

Dalton will NOT let India take the HR lead.

Leftwich pitched four innings, giving up a hit, two runs, and four walks but he also struck out eight.  He was replaced by fellow freshman Tommy Mace, who pitched two innings, giving up three hits and no runs.   Michael Byrne then relieved Mace and did his job, throwing three innings of scoreless relief to earn his 15th save of the season.

Lefty Nick Swan started on the mound for the Owls, the first of seven pitchers they would use on the night.   The loss went to reliever Jordan Poore who gave up three hits and two runs in just 1.2 innings of work.

Gator catcher Jonah Girand was named the Gainesville Regional MVP. He caught all 18 innings Monday night (and Tuesday morning). He hit three homers in the tournament and only got a chance to play after starting catcher JJ Schwarz went down with an injury.  Gator coach Kevin O’Sullivan says he thinks the team can learn a lot from Girand.

On To The Super Regionals

The Florida Gators have now advanced to play in Super Regionals next weekend in Gainesville. The Gators will face the Auburn Tigers.

For the 3rd time in SEC history, 6⃣ teams advance to Super Regionals — tying the NCAA Tournament record for most teams from one conference. pic.twitter.com/ymux5FLBfO