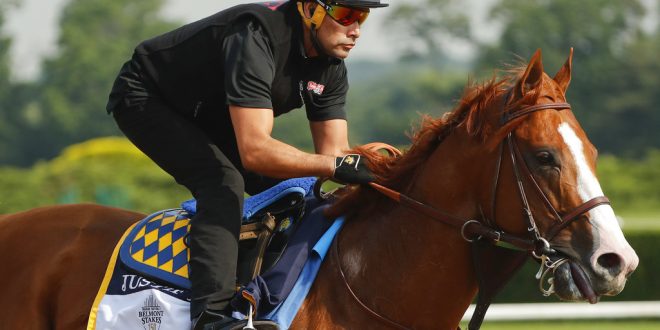 Triple Crown hopeful Justify gallops around the main track during a workout at Belmont Park, Friday, June 8, 2018, in Elmont, N.Y. Justify will attempt to become the 13th Triple Crown winner when he races in the 150th running of the Belmont Stakes horse race on Saturday. (AP Photo/Julie Jacobson)

As the horse-racing season comes to its final major race, all eyes are on the 2-year-old colt, Justify. After impressive wins at the Kentucky Derby and Preakness Stakes earlier this season, Justify has a chance to join the greats of racehorses. A win at The Belmont Stakes secures the Triple Crown for Justify.

A morning with the horse of the hour, #Justify. pic.twitter.com/qRj89asrxN

Why Justify Has a Chance to Make History

Just by his looks, the stallion is a masterpiece of athleticism and genetics. At roughly 1,380 pounds, Justify looks like a tank, but he moves like a Mustang speeding down the highway. Sports writer Dick Jerardi believes that Justify’s build will help the colt.

Along with Justify’s God-given ability are the odds. With 4-to-5 odds of winning the Belmont, Justify is the clear-cut favorite going onto the track.

The top challengers to Justify are Hofburg (9-to-2 odds) and Vino Rosso (8-to-1 odds). Hofburg ran 7th in the Kentucky Derby, but had one of the fastest finishes at that race. Vino Roso is trained by one of the top trainers in Todd Fletcher, who won the Belmont Stakes five times.

Based on history, the odds overall for Justify winning the Triple Crown are very low. Many horses have been in the same situation as Justify, yet have fallen in the final race.

Along with this, many of the Triple Crown winning horses took off the Preakness and have taken the rest coming into Belmont. Justify will not have this luxury, however, and will have to face off against horses who have gotten the extra time to recover.

With Belmont being a longer track than the Kentucky Derby and Preakness, the lack of rest may result in Justify’s downfall.

With a win at the Belmont Stakes, Justify can become just the 13th horse in history to win the Triple Crown and just the second horse to do it in the past 40 years.

Not only will a Triple Crown win be historic on its own, Justify has a chance to become just the second horse to win the Triple Crown while unbeaten. The first was Seattle Slew in 1977.

Finally, if Justify wins, he will become the first racehorse to win the Triple Crown while not racing as a two year old. That fact makes Justify’s season even more unprecedented, according to Jerardi.

The Belmont Stakes will be held tomorrow, June 9th, at around 6:37 p.m.

Jonathan is a sports journalism student at the University of Florida. He enjoys videography, editing, photography, and writing.
Previous Golden State Playing for it All Against Cleveland in NBA Finals Game 4
Next Auburn Tigers Look to Pull Off The Upset 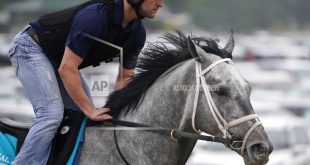 The 2021 Belmont Stakes are taking place this Saturday in Elmont, New York, with an …