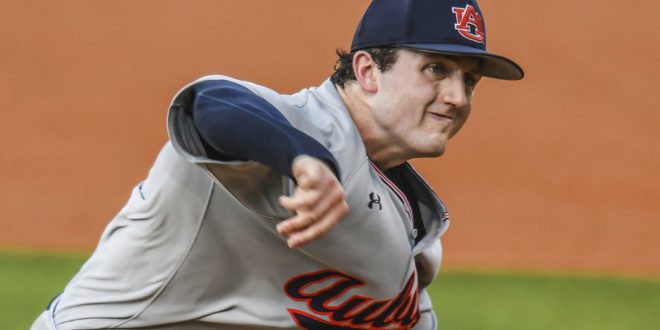 FILE - In this May 11, 2018, file photo, Auburn's Casey Mize pitches against Mississippi during an NCAA college baseball game in Oxford, Miss. First-round draft picks and soon-to-be millionaires Casey Mize and Brady Singer square off for the third time in 15 months, a rubber match between two of the best arms in college baseball. This one comes in the NCAA baseball tournament's best-of-three super regional featuring hot-hitting Auburn and defending national champion Florida. (Bruce Newman/The Oxford Eagle via AP, File)

Auburn Tigers Look to Pull Off The Upset

The Auburn Tigers baseball team(42-21) (15-15 SEC) has had its way these past couple of weeks. The team qualified for the Raleigh (N.C.) regional and destroyed every opponent that got in their way. The Tigers combined for a total of 40 runs and only conceded 12. First defeating Northeastern, then moving on to beating Army, and finally crushed the host team N.C. State to become the Raleigh Regional Champion.

Now with head coach Butch Thompson’s third year under his belt, the Tigers have advanced to the Gainesville Super Regionals and will take on the #1 seeded Florida Gators. Whoever wins, will have a birth in the College World Series.

This is the second time in school history that their baseball team makes it out of a four team regional going undefeated, the first being back in 1999. Thompson had no idea that his team would have this amount of talent going into the end of the season. But enduring a 23-33 record two years ago to making it to the Super Regionals this year is a huge accomplishment.

In 2017, the Tigers brought in a couple players from JUCO leagues to help fill out open slot positions in the team’s roster. Players like Josh Anthony, Jonah Todd, Jay Estes and Luke Jarvis. Those players played a huge impact on the team. Todd led the team in hitting, Jarvis developed into the best second baseman in the SEC, and Anthony earned Raleigh regional Most Outstanding Player.

They were extremely close on obtaining their first Super Regional berth last year. Unfortunately, the Tigers lost in the final game against Florida State in the Tallahassee Regional.

Although these seniors played a huge part, Casey Mize is probably the most important piece of this Auburn team.

Casey Mize, junior right-handed pitcher, has had his way throughout this entire season. Known for his potential on the mound, he’s shown what he can do when he’s face to face against an opponent’s batter. He has 151 strikeouts this season in 109 2/3 innings. He’s known for his superb ERA of 2.95, although he stands at a record of 10-5. He’s defeated the Gators once before, back in his sophomore year. He had a great outing earlier in the season against Florida, but couldn’t seal the victory despite striking out 10 in seven innings.

Here’s what head coach Thompson had to say when he found out that Mize was the first overall pick to the Detroit Tigers in this year’s MLB amateur draft this past Monday.

The Tigers are 1-2 when facing the Gators, and all three games were played in Gainesville back in late April. But that’s not what everyone is buzzing about. Many can’t wait to watch the matchup between Brady Singer of the Gators go up against Casey Mize. The Tigers have been on fire lately with their batting average as an overall team, hitting .286, with five starters hitting in double-digit homeruns.

Game 1 will be on Saturday at noon sharp if weather permits. Location will be in Gainesville, Florida, due to the Gators top seed.

Game 2 will be Sunday at the same time.

Recent grad from the University of Florida. Editing all articles on here while helping out the newbies. Love all things basketball.
@@MarcoJMartinez_
Previous Justify Looks to Take Triple Crown at Belmont Stakes
Next World Cup Russia 2018: Group B Preview