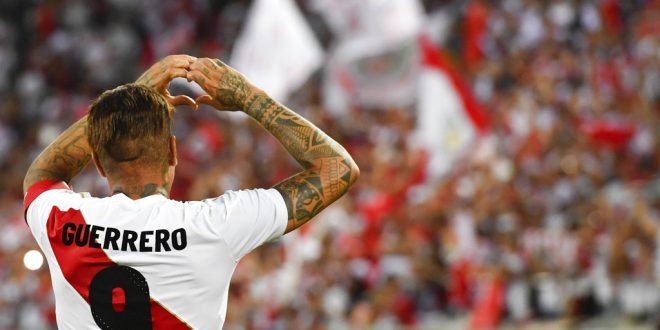 Peru's Paolo Guerrero celebrates after scoring during a friendly against Saudi Arabia in St. Gallen, Switzerland, on Sunday, June 3, 2018. Guerrero recently had a doping suspension overturned, allowing him to travel to Russia for the World Cup. (Gian Ehrenzeller/Keystone via AP)

By the time the final team had been seeded for the preliminary stage of the 2018 FIFA World Cup, the “Group of Death’s” reign of terror officially was over.

In its place were eight groups, each more even than the next. None, however, are quite as murky as Group C.

A traditional power. A footballing minnow. A Latin American side emerging from exile. A surging European squad. While France’s progression is all but assured, the task of predicting a second-place finisher from the likes of Australia, Peru and Denmark should give pundits their fair share of headaches.

What this group lacks in clarity, it makes up for in parity, and fans are in for one of the tournament’s most evenly-contested round-robin slates. Who’ll leap ahead on June 16? Read on to find out.

Manager Didier Deschamps steered Les Bleus through a near-perfect qualification campaign, finishing atop UEFA’s Group A with 23 of a possible 30 points. Since then, their winning form has persisted: The French have won four of six friendlies in the run-up to this summer’s tournament and tied defending champions Germany 2-2 in Cologne last November.

France is as sure of a lock to advance to the knockout rounds as any powerhouse in this tournament, and one glance at their roster reveals why.

Deschamps’ 4-3-3 set-up boasts quality at every position. Tottenham Hotspur mainstay Hugo Lloris offers a steady presence in goal, and ought to eclipse the 100-cap milestone during the competition. He’s the base of a steady spine that extends up the middle of the pitch: Barcelona and Real Madrid centre-halves Samuel Umtiti and Raphael Varane anchor the back four, while N’Golo Kanté should thrive in the holding midfield role that’s become synonymous with his name. Likewise, the midfield boasts an embarrassment of riches, and could feature the likes of Paul Pogba, Blaise Matuidi, Steven Nzonzi and Corentin Tolisso at various stages of group play.

In the attacking third, Ousmane Dembélé presents a speedy complement to Atlético Madrid star Antoine Griezmann, and is capable of scoring himself or setting up his teammates. However, it might be their countryman on the opposite flank that garners the accolades.

At only 19 years of age, the Parisian has already announced himself as a star in the making.  Previously linked to Spanish giants Real Madrid, Mbappé dominated Ligue 1, registering 13 goals and eight assists in 24 games played.

He’s also made his mark on the international stage. Despite being the youngest player on France’s 23-man roster, Mbappé has already earned 15 caps with the senior side, scoring four goals.

He’s pacy, yet technical, equally adept at generating chances as he is finishing them. Former Arsenal manager Arsène Wenger compared the wonderkid to Thierry Henry; and Mbappé has already broken one of the legendary frenchman’s records at his former club, Monaco.

Paris Saint-Germain wouldn’t shell €180 million for nothing. The world might soon recognize why they did.

Of the four teams in Group C, Australia may have the hardest time advancing.

The Socceroos eeked into the World Cup finals, finishing third in their qualifying group behind Japan and Saudi Arabia. Two playoff rounds followed, and after edging past Syria and Honduras with a combined goal differential of three in four games, Bert van Marwijk’s charges secured their berth to the tournament.

Employing a 4-2-3-1, the former Holland manager has the Australians playing well-organized, physical football. Gameplay centers on the midfield pivot of Mile Jedinak and Aaron Mooy: The former is tasked with screening the defensive line, while the latter orchestrates the offense from deep.

They are, however, inexperienced in their own end; and although they may be gritty, they don’t have the bite to punish teams on the attack. While Tim Cahill was named to his fourth World Cup squad, age could finally be catching up to the country’s legendary striker. Although he potted 10 goals for the Socceroos during their qualifying campaign, the 38-year-old forward only appeared in 10 matches for Millwall in The Championship, failing to find twine. His positional counterparts, Robbie Kruse and Tomi Juric, have managed a combined 13 goals over 116 caps. Cahill has scored 50 by himself in 11 fewer games.

Heading into the 2017-18 season, Brighton & Hove Albion were entering uncharted territory. The club had never made the Premier League before and had been absent from the top flight for the last 34 years. Despite splashing in the transfer market — and their signing of Aussie netminder Mat Ryan — many had them tabbed for relegation.

However, after 38 matchdays, Brighton found themselves above the drop, thanks in large part to Ryan’s showings between the sticks.

The native of Plumpton, New South Wales, started every week for the Seagulls, and established himself as one of the Premier League’s best keepers. Over the course of the season, Ryan registered 10 clean sheets — good for seventh among all goalies — and batted away the third-most saves in the competition (123).

Despite being peppered with the fourth-most shots on goal in the Premier League, Ryan also posted a .680 save percentage. For context: That figure outperforms England international Jordan Pickford (65.8) and Danish starter Kasper Schmeichel (65.5), and puts the Australian shot-stopper on par with Lloris (68.1), league-winner Ederson Moraes (68.4) and Belgian stalwart Thibault Courtois (68.5).

If Australia has any hope of springing a surprise, their starting goalkeeper will need to retain his midseason form.

Here’s where it gets interesting.

Perhaps no other team in this year’s tournament has gone through more drama to get here. After a nervy start to CONMEBOL qualifying, La Blanquirroja clinched points in seven of their last eight fixtures, earning a playoff berth at Chile’s expense. Following a 2-0 victory over New Zealand in Lima, the Peruvians celebrated their first World Cup appearance since 1982. Festivities, however, were cut short: After missing the playoff, captain Paolo Guerrero was ruled out of the World Cup, his previous doping suspension extended by the Court of Arbitration for Sport. A see-saw affair ensued and, after an appeal backed by the captain of each Group C side, the talismanic striker was reinstated to the team.

Upon his return, he netted a brace in a 3-0 friendly win over Saudi Arabia. Peru, though, had been clicking in his absence, and have gone unbeaten in their last 16 games, claiming victories against Croatia, Iceland and Uruguay. Manager Ricardo Gareca frequently deploys his team in a 4-2-3-1, giving São Paulo midfielder Christian Cueva license to roam the pitch. A pair of marauding fullbacks gives Los Incas width, freeing wingers Jefferson Farfán and André Carrillo to cut inside and support Guerrero.

After years of mediocrity, Gareca has his squad playing with the toque peruano that typified Peru in the past. Should they get past Denmark in their World Cup opener, they’ll put that style on display in the knockout rounds.

Over a 17-year senior career, Farfán has carved out an impressive European résumé. Between 316 games in the Netherlands, Germany and Russia, the 33-year-old wideman has booted home 107 goals.

Although he’s getting older, he isn’t showing any signs of slowing. Over his last club season with Lokomotiv Moscow, the native of Lima racked up 14 goals and five assists across all competitions, including four markers in Europa League play.

His specialty, though, is his playmaking. According to WhoScored, the winger has generated 44 assists since the 2009-10 season and couples his passing prowess with speed, one-on-one ability and set-piece mastery.

If Farfán flourishes, so will Guerrero; and that’s something every Peruvian wants to see.

If Peru is hot, so are the Danes.

Winners of Euro 1992 and the 1995 Confederations Cup, Denmark last lost a game on October 11, 2016. In the 606 days since, captain Simon Kjær and company have gone unbeaten 14 games unbeaten, demolishing Poland 4-0 on one occasion and ravaging the Republic of Ireland 5-1 in a playoff.

But can they carry that momentum into the World Cup finals?

Although he’s experimented tactically throughout qualification, manager Åge Hareide will probably opt for a 4-3-3. A midfield pivot of Thomas Delaney and William Kvist anchors the middle of the park, enabling the Danish fullbacks to push forward. Crafty Celta Vigo winger Pione Sisto routinely tucks in alongside Christian Eriksen in midfield, while big-bodied forwards Yussuf Poulsen and Andreas Cornelius push up to form a pseudo-strike partnership with Feyenoord’s Nicolai Jorgensen.

Additionally, the Danes are solid at the heart of their defense. Leicester City’s Kasper Schmeichel will tend goal, protected by a central pairing of Andreas Christensen — Chelsea’s ball-playing stopper — and Kjær.

Denmark have the talent to snag second in the group but lack depth at fullback. If Peru’s Jefferson Farfán and André Carrillo get loose out wide in their Group C opener, it could spell disaster for them.

The charge at the heart of Danish Dynamite, the Spurs midfielder is the team’s primary creative force. Nowhere was that more evident than in Denmark’s qualifying run, when he powered his team to Russia with 11 goals, joint-third in all of UEFA. That dominance is an extension of Eriksen’s domestic form: The Dane finished among the Premier League’s top-ten in assists, completed passes, shots, through balls and crosses.

With delightful touch and a scoring streak to match, Eriksen is among the most complete offensive players at the World Cup. That fact isn’t lost on Hareide, who deploys his star man in the hole between the midfield and forward blocks as a creative number 10. However, the Ajax product is allowed to roam the pitch.

After clinching qualification, Hareide called Eriksen one of the ten best players in the world. If opposing teams can scheme a way to mark him, the Danes may once again crash out at the group stage.