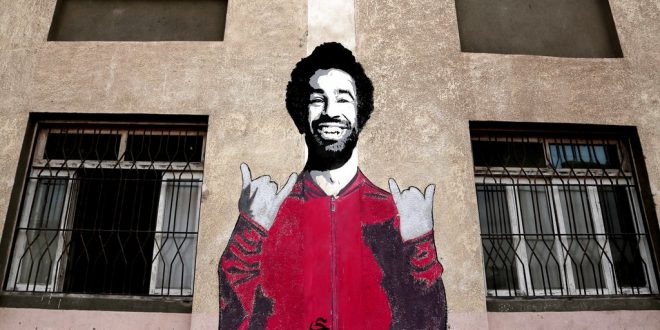 This May 2, 2018 photo, shows a wall mural of Mohamed Salah at a sports and youth center, in the Nile delta village of Nagrig, Egypt. Residents boast of how the Liverpool winger has poured millions of pounds into the village, with the beneficiaries’ list including a school, a mosque, a youth center and a dialysis machine at a nearby hospital. His success as a footballer in Europe’s most attractive league has inspired many parents in Nagrig to send their children to soccer academies in the hope that maybe one day they can emulate his success. (AP Photo/Nariman El-Mofty)

With the 2018 FIFA World Cup kicking off in Russia shortly, we start by taking a look at Group A.

On paper, no teams jump out as favorites to raise the cup in mid-July. Instead, the group appears decently balanced with the host nation Russia, an underrated underdog in Saudi Arabia, and two teams led by superstars in Egypt’s Mohamed Salah and Uruguay’s Luis Suarez and Edinson Cavani.

By virtue of being the host nation, the Russians did not have to go through the grueling European qualification. While that theoretically means more fresh legs, it also mean’s that the only competitive matches they’ve played over the past two years were in last year’s Confederations Cup.

As hosts, the tournament was a chance for fans to catch a glimpse of how the team might perform once the World Cup rolled around. The team had a promising start, defeating New Zealand in the opening match 2-0. However, Stanislav Cherchesov’s men were unable to make it out of the group stage, falling to Portugal and Mexico in a disappointing early exit.

Cherchesov returns many of the same faces from that tournament, with hopes that a second go around and the support of the home fans will lift them to new heights. Remember that ever since the USSR dissolved and the national team has played as Russia, the 2018 hosts have not made it out of the group stages (’94, ’02, ’14).

Igor Akinfeev returns at goalkeeper as captain of the national side as the team’s second most capped player. In attack, meanwhile, Fedor Smolov, Alan Dzagoev and Denis Cheryshev return in the attack as creative presences for Russia going forward. One young player to keep an eye on is Aleksandr Golovin, the 22-year-old CSKA Moscow midfielder, who could provide a youthful touch of talent in midfield on an otherwise veteran team.

Akinfeev is the heart and soul of the team at the back and will carry the pressure of the host nation with him in goal each game. This version of Russia doesn’t score a lot of goals, and faces dynamic attacks in Egypt and Uruguay. Therefore, Akinfeev will need to be solid.

The team comes in as the seemingly weakest side in the group, but Saudi Arabia’s qualifying would seem to suggest they pose a legitimate threat to advance to the knockout stages.

They qualified by placing second in Group B of Asian qualifying. The Saudis finished just one point behind group winners Japan, and beat out Australia for the second automatic spot on goal differential.

While the group hardly features players who ply their trade at big European clubs, the team is a tight and close knit one. The players have a familiarity with each other as all of them play in Saudi Arabia’s domestic league, with many coming from the three big clubs in Al-Hilal, Al-Nassar, and Al-Ahly.

The Green Eagles, led by former Chile manager Juan Antonio Pizzi, will likely sit back in their 4-3-3 and counter, especially against Salah’s Egypt and Uruguay with Suarez and Cavani. They’re no slouches going forward though, as they tied with Japan for the most goals in Asia’s final round of qualifying with 17.

The Saudi’s are in decent form as well, knocking of Greece 2-0 in a recent friendly, but will need to recover some confidence after getting demolished 3-0 by Peru in Switzerland last week.

The 31-year-old forward is a veteran presence up front with a knack for finding the back of the net. He finished as the joint-top goalscorer in Russia 2018 qualifying with 16 goals during the process. He’s already sixth all-time in goals for the Saudi national team, with 28 goals in just 39 caps.

In what provided one of the best moments of qualifying, Mohamed Salah’s final minute penalty against Congo to sent Egypt’s fans in to a frenzy and the Pharaohs to its first World Cup in 28 years.

While the Liverpool forward’s status for this World Cup was in doubt after suffering a shoulder injury in the Champions League final, it now appears he’ll fit for possibly even the opener on June 15th against Uruguay.

Salah’s health is obviously a major factor for Egypt’s chances in Russia. He’s coming off a record-breaking season after bagging 44 goals for Liverpool, and is the Pharaohs’ most dangerous player, wreaking havoc on the right wing and drifting into central positions.

In Russia, it won’t just be Salah though. Egypt have a talented and deep enough squad to be a potential dark horse. Arsenal midfielder Mohamed Elneny anchors the midfield double-pivot, while Stoke City’s Ramadan Sobhy provides an attacking presence on the wing opposite Salah.

Hector Cuper’s side are also solid in the back. They’ve given up just 18 goals in 32 games under Cuper, with 45-year-old Essam El Hadary in net. He’s set to become the oldest ever player to appear in a World Cup match, a record set just four years ago in Russia by Colombian goalkeeper Faryd Mondragon, who was 43 at the time.

In defense, some names that will be familiar are Ahmed Elmohamady of Aston Villa, Ahmed Hegazi of West Brom, and LAFC’s Omar Gaber.

For as much support as Salah will have, Egypt will only go as far as their star winger will take them. Just how vital is Salah to Egypt’s attack? He was directly involved in every goal Egypt scored in qualifying, scoring five and assisting on two.

Uruguay enter Russia 2018 as heavy favorites to win Group A and its easy to see why. Apart from having the most footballing pedigree in the group, the talent in the squad and the form shown through an unforgiving South American qualification have Oscar Washington Tavarez’s men looking like a threat to make a deep run in the tournament.

La Celeste finished in second in CONMEBOL qualification, only behind runaway leaders Brazil. Uruguay scored the second most goals in qualifying (32 in 18 games), also only behind Brazil. While they failed to beat Brazil or Argentina, they took care of business against every one else, especially on home soil. They managed a 3-0 win over Colombia in Montevideo, while also beating Peru 1-0 at the Estadio Centenario.

Leading the attack were the two superstar forwards they’ll lean on in Russia: Edinson Cavani and Luis Suarez. Cavan led CONMEBOL qualification with 10 goals, while both are coming successful season at Paris-St. Germain and Barcelona respectively.

For as well as Uruguay are known for their forwards (nod to Diego Forlan), they have always been famous for their “garra charrua”, which is a term used to describe the team’s grit and tenacity on the pitch. Embodiments of this carry over from past teams, such as center back pairing Diego Godin and Jose Maria Gimenez, and in players like Carlos Sanchez and Maxi Pereira.

In addition to that though, La Celeste do bring with a group of creative young players who can look to pose danger behind Suarez and Cavani. 20-year-old Rodrigo Betancur, formerly at Boca Juniors before moving to Juventus, is an exciting prospect at central midfield, while 24-year-old Giorgian De Arrascaeta is a skillful attacking midfielder from Brazilian club Cruzeiro, with the flash and flair to leave defenders in his path. That’s without mentioning Matias Vecino, who at 26 isn’t as young but still is a valuable piece in midfield as he is for Inter Milan.

Suarez is the all-time leading goalscorer for his country, but this World Cup, it’s Cavani’s show. He’s been in brilliant form for both club and country, bagging 40 goals across all competitions for PSG and leading South American qualifying in goals. His combination combination of pace, size, and strength will pose problems for opposing back lines. His ability to finish with his feet (which as improved significantly in recent years) and his head will provide the perfect partner for Suarez in the box. 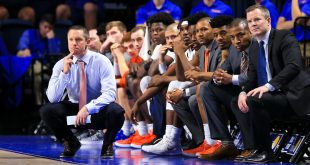 From Russia to Tennessee to Florida: Ruzhentsev is Ready