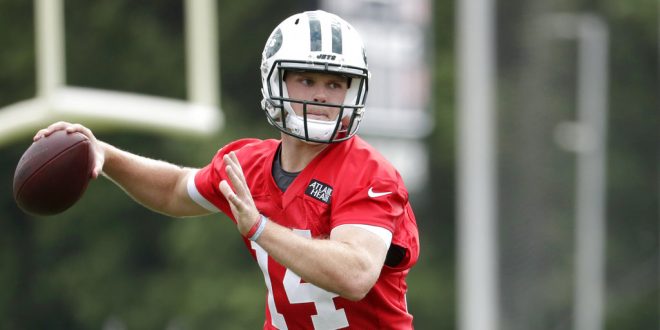 In years past, the New York Jets have had their fair share of quarterback woes. The list is quite lengthy. From Ryan Fitzpatrick to the most-memorable Mark Sanchez, it hasn’t been the most ideal situation at the position.

In 2016, the Jets finished fourth in the AFC East with a record of 5-11. Fitzpatrick threw more interceptions than touchdowns.

Last season, the story was not much different. Again, the Jets only managed to win five games, finishing last in their division. Veteran quarterback Josh McCown threw half as many interceptions as he did touchdowns.

Sam Darnold, the 21-year-old out of Southern Cal, might just be what the Jets need. He has an accurate, strong arm, a quick release and can throw on the run.

Darnold, the Jets’ first-round pick in the 2018 NFL Draft, had a rough time at his first day of OTAs, but that’s not unusual for most rookies. In later practices, he began to look more comfortable. He’s been receptive to feedback from coaches and teammates.

The young quarterback will have to compete with veteran quarterbacks Josh McCown and Teddy Bridgewater for the starting spot. However, he has already taken reps with the first-team offensive line.

Heading into minicamp, Darnold is happy with the progress he’s made so far. But he knows he has a little farther to go to get where he needs to be.

Quarterbacks coach Jerry Bates isn’t throwing too much at Darnold at once, but he is expecting him to pick up the playbook quickly.

In OTAs, Darnold was asked to change plays at the line of scrimmage, something he didn’t do much of at USC. He was given two plays and needed to decide which one to call based on the defense he sees. He will continue to work on that in minicamp.

The Jets’ mandatory minicamp starts today and ends on Thursday.

Camille Woodhouse is a Sports and Media student at the University of Florida College of Journalism and Communications. In the past, she has covered the Atlanta Falcons and Florida Gators football for various sports news outlets. She is an Atlanta native and a fan of football.
@CJW_SportsRadio
Previous Field Set for 2018 College World Series
Next Travis Kelce: “Mahomes doing an incredible job.”