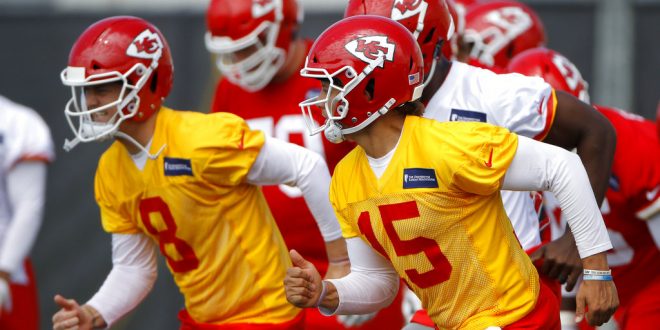 The Kansas City Chiefs are officially Patrick Mahomes’ to run.

A shocking 22-21 loss to the Tennessee Titans in the wild card round of last season’s playoffs set the wheels in motion. Weeks later, starting quarterback Alex Smith was shipped to the Washington Redskins, clearing space for the 22-year-old Mahomes to take the reins.

If player opinions are anything to go by, the offense is in good hands.

“He’s taking command of the huddle, which is huge,” Kelce told reporters on Monday. “He has to take control of this offense — and, arguably, this team — because of how much scrutiny really goes on the quarterback. It’s a lot of accountability, but I think Patrick is ready for it.”

The Chiefs knew what they were getting when they selected Mahomes with the 10th overall pick — an NFL-ready frame, a live arm and solid pocket mobility.

Alex Smith and Patrick Mahomes on the same play. Everything is equal except Mahomes gets the ball to Wilson more quickly. The benefits of Mahome's ability to throw from any platform is on display here. pic.twitter.com/q3Cuq78ly5

It also helped that the native of Tyler, Texas, shredded collegiate opposition.

Over a 32-game career with the Texas Tech Red Raiders, Mahomes completed 63.5 percent of his passes, racking up 11,252 yards through the air. Compiling a career passer rater of 152, the 6-foot-3 quarterback averaged 3.21 touchdowns per interception; and despite foregoing his final season of eligibility, he managed to finish with the third-highest passing yardage in program history.

Despite seeing limited action in his first professional season, Mahomes flashed the skill that made him a top prospect.

In his only start of the year, he closed out the regular season with a win over the Denver Broncos. Although he failed to throw a touchdown against one interception, the then-rookie signal caller turned in a solid performance, completing 22-of-35 passes for 284 yards.

With months to go until the start of the preseason, Mahomes still has time to sharpen his abilities and build chemistry with teammates. At the rate things are going, Chiefs fans could be in for a pleasant surprise come August.