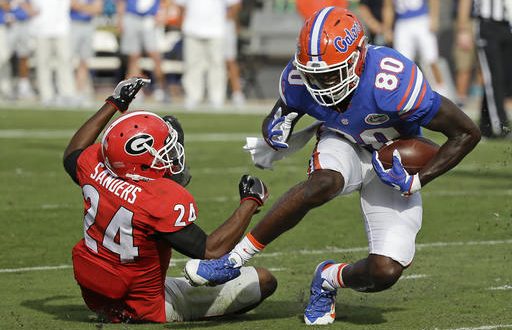 Florida tight end C'yontai Lewis (80) breaks a tackle by Georgia safety Dominick Sanders (24) on his way to a 19-yard touchdown on a pass play during the first half of an NCAA college football game, Saturday, Oct. 29, 2016, in Jacksonville, Fla. (AP Photo/John Raoux)

The NCAA just shook up the college football landscape.

Earlier Wednesday, the organization published a pair of rule changes that are set to affect the game in two major areas. The first updates the redshirt law for Division I footballers, while the second repeals a controversial transfer rule that required athletes to seek permission from their previous school before being recruited by another program.

The NCAA’s decision, predictably, has some coaches and fans excited.

Thank you @NCAA for the new Redshirt rule! This is great for college football! #BleedBlue #GoBroncos

According to SBNation, the overhauled redshirt rule allows top-division football players to participate in up to four games without losing a year of eligibility.

Blake James, athletic director for the University of Miami and chairman of the Division I Council that approved the rule change, noted how the decision could help coaches discover their squad’s depth and prevent injuries from overuse.

“This change promotes not only fairness for college athletes, but also their health and well-being,” he said. “Redshirt football student-athletes are more likely to remain engaged with the team, and starters will be less likely to feel pressure to play through injuries.”

However, the revision doesn’t extend the NCAA’s general eligibility window. Per the organization, players still have five years to burn through four years of eligibility.

In a news release, the NCAA noted that it would dump its old transfer method in favor of a new “notification-of-transfer” model. In essence, the change requires schools to upload the names of student-athletes to a national database within two business days of the athletes informing them of their decision to transfer.

The move ensures that athletic departments can no longer prevent players from receiving scholarships elsewhere. Per the NCAA, it also “ends the controversial practice in which some coaches or administrators would prevent students from having contact with specific schools.”

Despite the changes, the NCAA’s rules aren’t totally binding. And with other a national restrictions still in place, some feel there’s more work to be done.