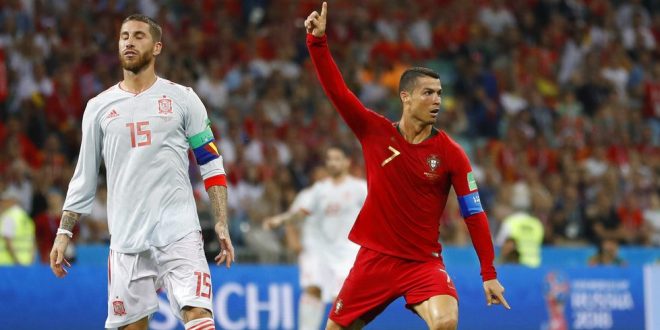 Portugal's Cristiano Ronaldo celebrates his side's second goal during the group B match between Portugal and Spain at the 2018 soccer World Cup in the Fisht Stadium in Sochi, Russia, Friday, June 15, 2018. Left is Spain's Sergio Ramos. (AP Photo/Francisco Seco)

Today’s FIFA World Cup triple-header created excitement, marked history and left many speechless. Six teams went head to head today and only two came out on top when it was all said and done. Today’s games featured three continents and two teams that many have never even seen play before. Read below to recap the highlighted events of each match.

Edinson Cavani and Luis Suarez, two of Uruguay’s world-class forwards couldn’t find the back of the net Friday morning against Egypt in the second game of Group A play. Yet two of their most experienced defenders combined for a crucial goal in the closing minutes of the match.

Uruguay captain Diego Godin and teammate Jose Gimenez who are a talent in the backfield for Atletico Madrid, helped Uruguay take a commanding lead in the 89th minute. They anchored the backfield and hardly allowed Egypt to produce any threats to Uruguayan goalkeeper Fernando Muslera.

Unexpectedly, Egypt committed a foul on the left hand side from the perspective of Egyptian goalkeeper El-Hadary. Midfielder Carlos Sanchez stepped up and delivered a magnificent cross to the center of the penalty box and found Gimenez. Gimenez elevated over Egyptian midfielder Mohamed Elneny and headed in the only and decisive goal of the match.

In addition, analysts were disappointed with Uruguay’s gameplay, who seemed out of rhythm in the first half. Nearly tying against a team without their star player Mohamed Salah was not a good sign for Uruguayan head coach Oscar Tabarez. Salah, a breakout star who’s scored 44 goals for Liverpool, suffered a shoulder injury in the Champions League Final against Real Madrid. He was eligible to play today but did not participate due to the coach’s decision.

In turn, although there are two games remaining for both teams, Egypt’s chances look slim if Salah doesn’t join the starting lineup in the upcoming games against Russia and Saudi Arabia. As for Uruguay, if they maintain their lockdown defense and the chemistry revamps itself between Suarez and Cavani, then there won’t be an issue with them advancing to the round of 16 after facing Russia and Saudi Arabia next week.

This match was considerably a sluggish game on both sides. Many fouls and/or flops occurred within the 96 minutes of allotted game time. A lot of injuries took place, including Noureddine Amrabat of Morocco who banged his head into an Iranian defender’s shoulder. He was later substituted due to concussion protocol.

Alireza Jahanbakhsh, a star for Iran, was taken off the pitch on a stretcher in the final 10 minutes. He has been attracting Italian Serie A team Napoli these past few weeks in contract negotiations.

Furthermore, many expected this game to be entertaining because of the high caliber players on Morocco’s roster. Like Achraf Hakimi of Real Madrid and Medhi Benatia who plays for Juventus, or even Ghanem Saiss who plays for Wolverhampton Wanderers.

But, Iran’s attacking form came alive in the added time after regulation in the 94th minute. A free kick was claimed by the referee and Iran took advantage… and Morocco did as well. Aziz Bouhaddouz of Morocco tried to defend his goalkeeper off the free kick and by heading the ball out of harm’s way, little did he know that he headed the ball straight into his own net, making his nightmare a reality.

Morocco has lost every world cup opener they’ve participated in. That includes 1970, 1986, 1994, 1998 and now 2018. Iran won just their second game ever, with their first being against USA in 1998. It’s been a tough week for Moroccan sports as they just lost their 2026 World Cup bid to the North American continent as well.

This match showed the true emphasis of how the sport of soccer (or football/futbol) can be such an exciting pastime. These two power house teams from Europe gave the world what everyone hoping for.

The Portuguese stunned Spain in the first half. A contraversial penalty was called by the referee in the opening minutes of the match and Cristiano Ronaldo placed it in the back of the net. 20 minutes after, Atletico Madrid forward Diego Costa juked two defenders and puts Spain on the board. Both teams were playing great on both sides of the ball throughout the rest of the first half.

Spain has one of the scariest defensive lineups in the world cup with Gerard Pique, Sergio Ramos, Jordi Alba and Jose “Nacho” Iglesias, and they were playing their part to deny the ball from Portuguese forwards like Bernardo Silva and Gonçalo Guedes. And later with Andre Silva and Ricardo Quaresma. But Ronaldo was just too much for the Spanish back four.

Ronaldo shot effortlessly towards goal and goalkeeper David De Gea couldn’t control the rocket strike and let the ball slide into the net to put Portugal up 2-1 in the final minute of the first half. Then, the fun began.

It seemed like newly acquired Spanish head coach Fernando Hierro had a lot to say in the locker room during halftime that got the squad fired up. In the first 15 minutes, Spain took a 3-2 lead off of Costa’s second goal tip in followed by an absolute perfect 25-yard shot by Nacho that knocked the far post and was assisted with a friendly bounce off the left post.

Here is the Superb goal from Spain’s #4 Nacho! pic.twitter.com/2IwekR8G95

Furthermore, it all seemed over for Portugal’s squad during the final minutes of the match. Desperate substitutes began to pour out onto the field from the Portuguese bench. But luck was in the Portugal squad’s favor when Pique committed an unnecessary foul near Ronaldo’s favorite spot. The rest was history.

Ronaldo became the oldest player in World Cup History to score a hat trick and he ultimately tied the amount of goals he’s scored in his past 13 World Cup games.

Unexpectedly, Iran is on top of the leaderboard with Spain and Portugal looking to take the spot in next week’s Group B matchups.

Recent grad from the University of Florida. Editing all articles on here while helping out the newbies. Love all things basketball.
@@MarcoJMartinez_
Previous Rays and Marlins Break Win Streaks With Losses
Next CWS Preview: Florida’s Road to Repeat Begins Against Texas Tech