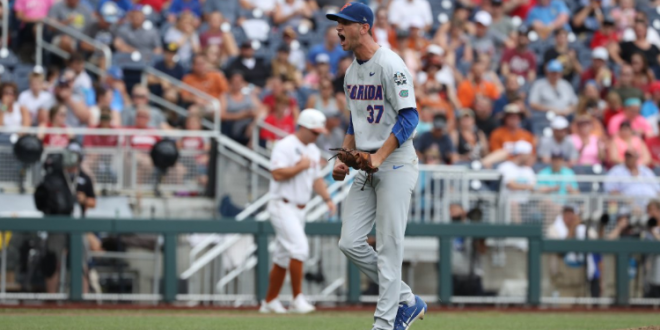 The Florida Gators (48-20) staved off elimination Tuesday evening with a 6-1 win over the Texas Longhorns (42-23). Junior Jackson Kowar recorded a career-high 13 strikeouts over 6.2 innings of work en route to his 10th victory of the season.

Florida’s offense came out of the gates ablaze. The first three hitters to face Texas starter Blair Henley reached base. The third of those hitters, SEC Player of the Year Jonathan India, picked up his 49th RBI of the season via a RBI single that scored Deacon Liput. However, Florida failed to score any more runs in the first and then squandered away a bases loaded opportunity with no outs in the second.

The Gators lead off hitter again reached base in the third inning when India reached on a fielding error by Texas third baseman Ryan Reynolds. India then advanced to second on a wild pitch and Dalton walked to give Florida another early golden opportunity. However, the Gators again failed to capitalize.

This time it was a mental error that did them in. With now one out in the inning, Dalton took off running from first while India stayed put at second. Instead of staying put on second base and letting Texas tag out Dalton, India got caught in a pickle and was retired. Dalton managed to make it back to first safely, but the Gators would again fail to push across a run.

After escaping a jam in the first inning, Kowar found his groove and never looked back. While the Florida offense was struggling to capitalize, he kept Kody Clemens and the rest of the Longhorn offense at bay. The right-handed junior recorded a career-high 13 strikeouts and gave up no runs over 6.2 innings of work.

After the game, Kowar emphasized how important it was that he managed to get out of the early jam in the first unscathed.

The 13 strikeouts is the most ever recorded by a Florida pitcher at the College World Series. Battery mate Jonah Girand said Kowar’s changeup was dialed in and that being able to locate the pitch consistently was a big key to success.

Clemens said Kowar, who threw 121 pitches, commanded his “95, 96 mph fastball” throughout the start and, like Girand, he also cited the changeup as a difficult challenge for the entire Texas offense to handle.

“Coming out of his hands it looked like a fastball to most of us,” Clemens said. “And he executed it really well.”

After the game, Texas head coach David Pierce sounded impressed with what he saw out of Kowar.

“He was very locked in,” Pierce said. “The thing about Kowar is that when you have stuff like that, it’s one thing, but when you can mix stuff with command, that’s when you’re a first-rounder.”

India Opens it Up

The Gator offense finally broke through in the top of the sixth. Nelson Maldonado singled home Blake Reese to put Florida up by two. However, the real knock-out punch came in the following at-bat when India hit a three-run home run, his 21st of the season, to put the Gators up 5-0.

After the game, India said he was glad he could come through for the team and help build some momentum. “I was just sitting dead red in that at-bat,” he said. “I got the pitch I wanted and I put a good swing on it.”

India also cited the Maldonado RBI single as a major turning point. “That at-bat was huge for us. We needed that,” he said. “Nelson, the whole year, he’s a clutch hitter for us.”

Nick Horvath added icing on top of the cake when he hit a solo home run, his seventh of the season, in the eighth. The ball wound up hitting the Texas Longhorns logo in the bullpen in left field before landing.

Jordan Butler and Michael Byrne closed out the game for the Gators. Butler picked up the third out of the seventh inning via strikeout. Byrne then took over for him in the eighth after Butler walked the first two batters he faced. Texas picked up their lone run of the game in the inning when DJ Petrisky’s RBI single scored Austin Todd to make the score 6-1, the eventual final.

Senior captain JJ Schwarz broke out of an 0-for-15 slump and picked up his first hit since returning from a hand injury. He went 1-for-5 in the game.

Florida now moves on to face the loser of the Texas Tech-Arkansas matchup on Thursday, June 21 at 8 p.m. ET.

There’s a strong chance freshman Jack Leftwich will get the start for Florida and freshman Tommy Mace will likely make an appearance as well.

After the game, Florida head coach Kevin O’Sullivan touched on how he’s going to need them to perform well if the team is going to have success.

“…a couple of these freshmen will have to pitch an important game for us if we’re going to get back into it, because obviously we just — when you have to win four in a row, you put yourself in a position where some other guys have to step up,” he said.

Tuesday’s win marks the first time since 1991 Florida that has followed a loss in their College World Series opener with a victory in the next game.

I'm an above-average golfer with surprisingly great touch around the greens. Click on my twitter link for some sports talk.
@Ry_McGinn
Previous Gators Softball Stadium Renovation Begins
Next Gator Baseball Managers: Meet the Team Behind the Team