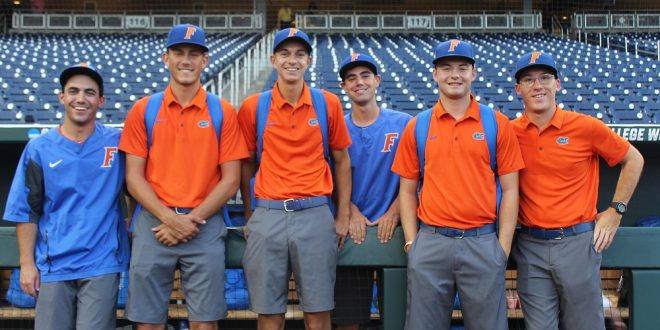 Gator Baseball Managers: Meet the Team Behind the Team

Most baseball fans know the Florida Gators have been the No. 1 team on the field for most of the year. But what they don’t know is all the work that goes on behind the scenes that allows them to be so successful.

Florida baseball’s equipment managers put in hard work day in and day out in order to help make the program run. They have various roles on the team that range from setting up the field before practice to throwing batting practice to the players.

Being a manager is a bit of a thankless job, as each one enters knowing they will never have the chance to play. But just having the opportunity to be a part of the team and be around the game they love makes the whole experience worth it.

Despite not having a roster spot or getting a uniform, the managers are all still treated well by the players and coaching staff, who understand the difficult nature of the job.

“They’re there way before us and they’re there all night long,” Florida infielder Shane Shifflett said. “They’re good.”

The main requirement of being a manager is a love for baseball and continuously showing a desire to be a part of the team. These are without a doubt qualities that all six of the current managers possess.

This is Wydetic’s second year working as an equipment manager for the Gators, and he has enjoyed every minute of it, especially winning the National Championship last season.

He says it’s always an incredible feeling anytime you can win the last game of the season and winning was unique for them because they knew if they had lost, all the work they had done wouldn’t have felt as worth it.

Because the managers have such a crucial role on the team, they also received the championship gear and ring. He has only worn the ring a couple of times, though, because it’s so massive.

For Wydetic, the best part of his job is the fact that Florida baseball is such a dominant program that has a lot of success. The winning makes all of the work he does really worth it, as well as a little easier.

He credits a lot of the program’s success to the coaching staff that always seems to know the right moves to make and is able to elevate the skill set of each player that comes through the program.

Wydetic knows he is a part of something bigger than himself and says it’s impossible to put a price tag on that.

On the other hand, his least favorite part of the job is the lack of sleep and the constant late nights.

Before making the decision to come to UF, Wydetic had a potential opportunity to play baseball at a small school up north. However, he wanted to go somewhere that reflected all the work he had put in academically, so he felt Florida was the perfect fit. And after becoming a manager for the team, he knew he had made the right decision.

In the future, Wydetic wants to either go to law school or coach baseball, but he would prefer to be able to stay close to the game he loves and coach.

After playing baseball all his life, Guengerich knew he wanted to stay around the game in college.

When he first arrived at UF, he began playing on the club baseball team. He then received a text from his high school coach, who had previously been a baseball manager at Florida, asking if Guengerich would be interested in the same position. He told him he was interested and got the job after being recommended by his coach.

At the end of his first year on the job, Guengerich is loving it so far. Some of his specific duties include throwing with players who are on programs rehabbing from surgery, as well as throwing batting practice.

Another way he spends a lot of his time is playing with Finn O’Sullivan, head coach Kevin O’Sullivan’s son. Guengerich enjoys his time with Finn, calling him a funny kid. Although, he made sure to add you can’t really win when you play games against him.

A native of Sarasota, Geungerich has played with and against a handful of the Gator players for several years throughout his baseball career. He played on the same high school team as pitcher Nick Long and has faced pitchers Tyler Dyson and Colton Gordon-Zimring. These previous relationships have only made his current bond with the players that much stronger.

For Guengerich, the best part of his job is getting to throw with the players and help them rehab. But his least favorite part is having to use the bus late at night, in addition to scrubbing the players’ pants, which was the consensus worst part in all of the manager’s opinions.

Guengerich’s experience as a manager has recently become even more exciting than usual. During Game 3 of Florida’s Super Regional series with Auburn, he was sitting down the line, shagging any foul balls that came his way. And then, things quickly became interesting:

As a sport management major, Guengerich hopes to one day work with a professional sports team but isn’t sure yet exactly the role he would like to have.

Arena played baseball all throughout his childhood, but as he began to approach college, he realized he probably wasn’t going to have the chance to play. But he loved the game so much that he wanted to make sure he continued to be a part of it. And that’s exactly why he made the decision to become a manager.

Arena learned about the manager job from his cousin who held the same position and graduated from UF in 2015. Having a family member who had already gone through it allowed him to be very aware of what to expect.

As a former left-handed pitcher, one of Arena’s specific roles is throwing batting practice to the team prior to Florida facing a left-hander.

Something Arena is very appreciative of is the respect he and the rest of the managers receive from the players. He says they are very good about including them in team activities.

But the worst part? Again, laundry.

Arena was also a part of last year’s championship-winning team. It’s hard for him to put the feeling of winning into words but says it was definitely a night he’ll never forget.

Being a manager has certainly been a highlight of his college experience, which is good because he invests so much time into it — he spends about twice as much time at the field as he does working on course work.

As far as long-term plans go, Arena has his sights set on being the next Peter Brand (Jonah Hill’s character in Moneyball.) He wants to be someone who works in a baseball front office and works with the numbers — he’s very interested in sabermetrics.

Reed had more of an unorthodox way of landing the manager position. The Massachusetts native says he was online looking to buy something completely different when he came across an application to be a baseball manager.

A 4-year high school baseball player, Reed wanted to remain close to the game even though he knew he wasn’t going to get a chance to play at a school like UF.

His experience as a left-handed pitcher and first baseman means he can also throw batting practice to the players on certain occasions.

Reed had a bit of a rare opportunity in that he has had the chance to live with a few Gator players during the school year — he roomed with Jonathan India, Deacon Liput, and Nick Horvath. He says it was great because he got to interact with them on a daily basis and developed close relationships.

As is the case with the rest of the managers, Reed doesn’t enjoy having to do laundry. However, he says the atmosphere that exists around the team is more than enough to make up for it.

One part of the job he particularly enjoys is shagging fly balls and sometimes getting to take batting practice on open field days. These are things he never thought he’d have the chance to do, so he’s making sure to take advantage of the opportunity.

As a finance major, Reed wants to be a CEO of a corporation or a GM for a team in the future.

Swanick’s story is a little different from the others’ because he has a very limited baseball background — he didn’t play the game growing up. However, once he started getting into it, he was all in.

His favorite aspect of the job is simply getting to be around baseball. He realizes the great opportunity he has and is making the most of it.

But for him, all the work he does mentally grinds him down, and this is the worst part. The long days that turn into nights are exhausting.

On top of all the work Swanick puts into Gator baseball, he is majoring in both math and economics. As a double major, he has had to learn to budget his time extremely well.

Luckily, he says the economics degree is built well for doubling it with something, so that makes it a little easier on him.

Eventually, Swanick wants to take everything he has learned throughout his education and work in a baseball front office in sports statistics or player evaluation.

Overall, the job of an equipment manager is tough, but it’s also incredibly rewarding. Despite all the grueling 10+ hour days, there’s nothing that compares to being a part of the Florida Gator baseball team for someone who loves the game as much as these guys do.