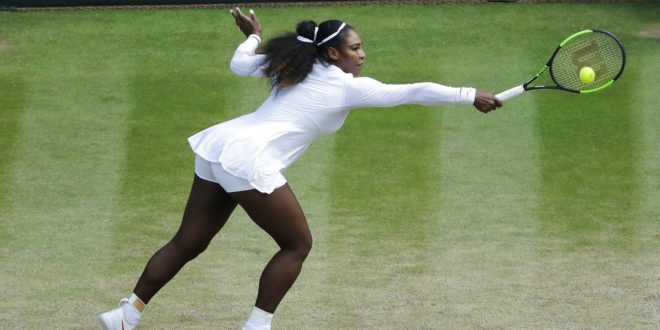 Just ten months after having a child, Serena Williams advanced to her to tenth Wimbledon final with a chance to win her 24th grand slam title.

She defeated Julia Goerges 6-2 and 6-4 in two sets. Williams had five aces on the day and her top speed was 119 MPH. She cruised to the win in just her fourth tournament back.

Williams faces Angelique Kerber on Saturday in a rematch of the 2016 Wimbledon Final.

Kerber defeated Jelena Ostapenko 6-3 and 6-3 today to advance. She beat Williams in the 2016 Australian Open before losing to her in two sets in the Wimbledon Final.

She’s a former world number one and a two-time major winner.

The last time @serenawilliams and @AngeliqueKerber met at #Wimbledon pic.twitter.com/BhP06WHFVR

Kerber won seven straight games at one point during today’s match. She only committed seven unforced errors and only needed 68 minutes to win both sets.

“”It was a tough match. Jelena plays great tennis, she hits the balls hard. It’s such a great feeling to be back in the final here. I’m really excited,” she said after the match, “It doesn’t matter who I face in the final. I will just go out and try and win the match.”

Each of these top players are on a comeback path after 2017. Williams sat out most of the year after winning the Australian Open pregnant, and Kerber faced a down year after her 2016 career-best run where she won two majors.

She started 2017 ranked number one but ended it ranked 21st. Williams is coming back from more than the pregnancy. She had health issues related to it and had multiple surgeries and blood clots.

Williams stated that this title would rise to the top of her achievements because of what she’s had to overcome.