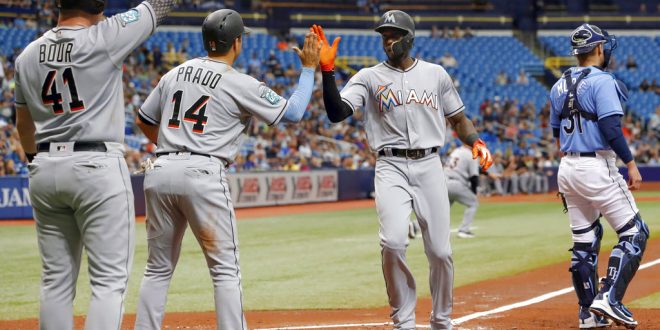 St. Petersburg was the site of an all-Florida weekend series of MLB action.The Miami Marlins defeated the Tampa Bay Rays two games to one on the road. The Rays, however, are riding momentum after taking the third game of the series 6-4 on Sunday.

Friday’s game would get the action going quickly. Miami was unable to get anything going in the top of the first, leaving Tampa Bay to take control in the bottom. Kevin Kiermaier would double to center, leading to Adeiny Hechavarria hitting a left single and a Kiermaier score.

Miami would answer back in the third, with a homerun from Derek Dietrich. The action would pick up with a Dietrich homerun resulting in three scores from Cameron Maybin and Garrett Cooper. All-star J.T. Realmuto added to the scoreboard, as well as Brian Anderson, before Carlos Gomez, Joey Wendle and Jesus Sucre boosted Tampa Bay’s score. Mallex Smith would get the final run, but was not enough for the Rays to topple the Marlins.

We rallied for four in the ninth.

Saturday’s action was not as eventful. Miami would score in the top of the fourth, thanks to Justin Bour and Starlin Castro. Tampa Bay answered quickly with a Wendle homerun in the fourth, and action would pick up in the top of the seventh. Cracking the ball for 423 feet, Maybin extended the lead to 3-1, before Ji-Man Choi tried to lead the rally in the ninth. However, the Marlins would once again win by one on the road.

Sunday saw a turnaround for Tampa Bay. After losing two in a row, the Rays would look to strip the Marlins of a series sweep. It started off great for Miami, scoring four runs in the top of the second after a Miguel Rojas double, leading to a Bour and Martin Prado score. Maybin would score soon after, and Rojas would complete the scoring output.

C.J. Cron scored for Tampa Bay in the bottom of the second, leading to a 4-1 score. The Rays would take the rest of the game to mount a comeback, and it came to fruition in the bottom of the ninth. Jake Bauers scored, and was followed by a Daniel Robertson walk-off grand slam, putting Tampa Bay over the Marlins 6-4.

Up next for the Miami Marlins is a matchup at home against the Atlanta Braves. Looking to rebound from taking the loss on Sunday, Miami will take the field on Monday night, beginning at 7:10. For the Tampa Bay Rays, they look to a divisional matchup on Monday night as well, but against the New York Yankees. That matchup will emanate from Tropicana Field in St. Petersburg, Florida. ESPN 98.1 FM – 850 AM WRUF will have coverage of the matchup beginning at 6:30 p.m.