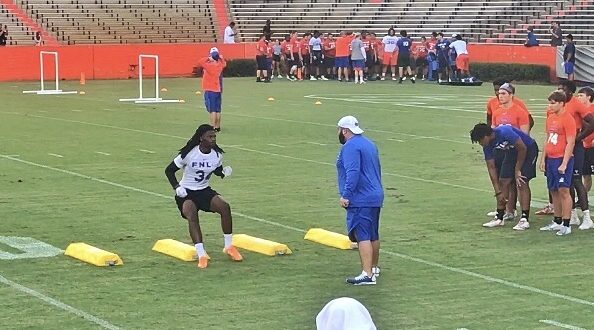 There were many top recruits in attendance for Florida’s Friday Night Lights. The camp was open to high school players in their sophomore though senior year. Currently, Florida has 11 verbal commits for their 2019 class and the class is ranked 35th.

Many of the bigger names in attendance traveled quite far for the camp. One name missing from the camp was the number one overall prospect and 5-star WDE, Kayvon Thibodeaux, whose flight from California got cancelled.

What the Recruits Had to Say

Four-star ATH and Ole Miss commit, Diwun Black, enjoyed his first visit to UF. Black is from Forest, MS and this was his second time visiting the state of Florida. He participated in the camp and said he valued what LB coach, Christian Robinson taught him during FNL.

Four-star dual QB, Jalon Jones, is from Richmond, VA. He decided to participate in FNL despite being highly ranked and already committed, because he wants to use his time getting better.

Another relationship Jones has been developing, is with the QB coach, Brian Johnson. Jones says he believes Coach Johnson will be a positive influence in his life.

Four-star OLB and Gator commit, Tyron Hopper, is from Roswell, Ga. He was on his 3rd visit to UF and plans on visiting again in the fall. Tyron emphasized how solid his commitment to Florida stands.

2020 four-star WR, Jordan Johnson, said he was impressed by the IPF and the Swamp in his first visit to UF. He also likes how strong the academics are at Florida. Johnson says he probably won’t be committing until the end of his junior year and possibly not until his senior year.

Johnson said that WR coach, Billy Gonzales, explained how important it is for UF to replenish the position by 2020.

He also mentioned that the coaches like his speed and the way he attacks the ball. Johnson currently has a 4.5 40-yard dash.

Johnson says that he’s going to try to visit Arkansas, Ohio State, Notre Dame and Florida in the fall.

Xavier Restrepo: Everyone took notice of number #91. He was breaking ankles and catching passes/interceptions. Restrepo is a 2020 ATH and goes to St. Thomas Aquinas High School.

Lloyd Summerall (four-star WDE) and Keon Zipperer (four-star TE) did not participate in FNL. However, the pair did tour the campus together.

Here is what I gathered for who is visiting for FNL. List can change as the day goes on. #GoGators pic.twitter.com/NcAAD6FSwp

Follow me on Twitter @SarahCarlieUF or Instagram @sarahcarlie
@SarahCarlieUF
Previous Training Camp Update: Baker Mayfield
Next Chipper Jones Among Those Enshrined in Baseball Hall of Fame