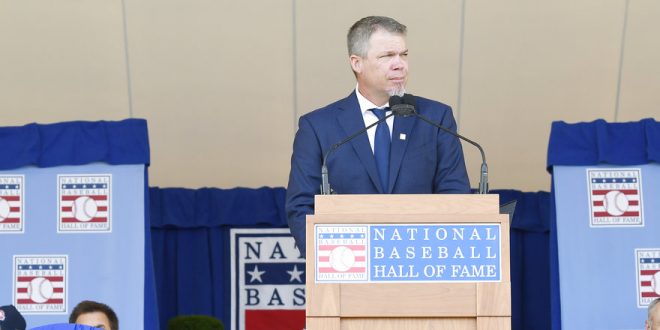 Chipper Jones Among Those Enshrined in Baseball Hall of Fame

On a sunny Sunday afternoon in front of 50,000 spectators in the city where baseball was born, Chipper Jones joined the legends of baseball.

During the induction ceremony yesterday, Jones and five other baseball greats got the opportunity to look back on their Hall-of-Fame careers.

Looking Back at Chipper Jones’ Career

Jones, a DeLand, Florida native, was a two-sport athlete growing up, excelling in football and baseball. He passed on his football opportunities, however, to focus on baseball.

After Jones impressed in high school, the Atlanta Braves selected the young switch hitter with the No. 1 overall pick in the 1990 MLB Draft. Jones struggled early in his career, battling injuries that limited his success in the batter’s box.

However, when healthy, the third baseman was raked. Jones made his Major League Debut in 1993, but did not become a mainstay in the Braves lineup until 1995., when the Braves won the World Series that year.

That season, Jones batted .265 with 23 homeruns, jumpstarting his 19-year career as a lifelong Atlanta Brave. Jones won the National League MVP in 1999, mashing 45 homeruns and driving in 110 RBI’s.

He continued to mash from both sides of the plate throughout his career, amassing eight all-star appearances and a batting title in 2008. That season, Jones had a .365 batting average at the age of 36 years old.

Jones’ amazing career was capped off with a tremendous finish, hitting a walk-off homerun in Atlanta against the Philadelphia Phillies to mark the final homerun in his career.

As we gear up for the Class of 2018's induction into the @baseballhall on Sunday, we take a look at Chipper Jones.

On Sept. 2, 2012, Jones hit the 468th and final home run of his Hall of Fame career. The epic three-run walk-off homer capped a career of clutch moments. pic.twitter.com/Fs6TwFdout

During his Hall of Fame induction speech, Jones emphasized his gratitude for everyone that has helped him get to where he is.

Jones was especially appreciative of his former manager Bobby Cox, who not only coached the Hall of Famer, but also drafted him back in 1990.

Other Players Part of 2018 Hall of Fame Class

Five other players would join to the Hall of Fame along with Chipper Jones.

In his speech, Thome discussed his appreciation of the fans, having this to say:

The bells are ringing for Trevor Hoffman in Cooperstown. pic.twitter.com/OyiGMn2YBB

Vladamir Guerrero will go down for being able to hit everything thrown at him in the batter’s box while having a rocket for an arm in the outfield. Guerrero was a nine-time all star and batted .318 with 449 homers and 1,496 RBI’s.

The Hall of Fame’s veteran’s committee also chose two players to send to Cooperstown this year.

The first player was pitcher Jack Morris, who played 18 years in the MLB, is best known for a 10-inning complete game shutout in Game 7 of the 1991 World Series to clinch the title for his hometown Minnesota Twins. His performance earned him that year’s World Series MVP.

The second player selected by the veteran’s committee was shortstop Alan Trammell, a teammate of Morris who spent his entire 20-year MLB career with the Detroit Tigers. Trammell was a six-time All-Star who earned four Gold Glove Awards and three Silver Slugger Awards during his career.

As great as his career was, Trammell could not believe his induction, saying:

Overall, the Hall of Fame Class includes players of different skills and stories, and all are forever in baseball history.