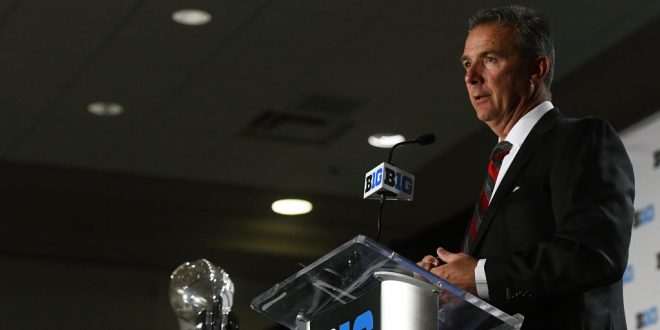 The Urban Meyer Saga: What You Need to Know

How the mighty are falling. Ohio State University head football coach Urban Meyer is facing more trouble than he can handle. OSU has placed Meyer on paid administrative leave following reports that he knew about a domestic violence allegation against assistant coach Zach Smith.

Firstly, to simplify the situation, here is what information is out on this saga. In 2015, Courtney Smith claimed that people close to Smith were aware of a domestic violence altercation that took place in 2009. One of those people? Urban Meyer. When this story first broke, Meyer denied knowing anything about the allegations against Smith at Big 10 media days.

Secondly, a report would later reveal that Meyer had knowledge of the altercation, resulting in OSU placing Meyer on paid administrative leave on Wednesday.

Chris Landry, podcaster and scout, details how much Meyer exactly knew about these altercations:

In July, Smith was let go from the program when multiple allegations were brought to public light.

In a sit-down interview, Smith would reveal that she came forward to Shelley Meyer, Urban’s wife, about the ordeal. According to Smith, Shelley could not confirm that she shared the information with Urban.

Thirdly, former ESPN and CBS reporter Brett McMurphy, who originally broke the story in 2009, would appear on SportsCenter. He would state that he has mounting evidence that shows Urban knew about the allegations. Landry would explain how various staff member’s wives knew about the situation:

Meyer, who has coached for 17 years in Bowling Green, Florida and Ohio State, holds a career record of 177-31 as a head coach. This record includes two championships in Florida and one in 2014 for the Buckeyes. The investigation is currently underway for the incident, and Meyer’s future is currently up in the air for this season.

Finally, stick with ESPN 98.1 FM – 850 AM WRUF as more details become available, as well as for all things college football as the season approaches.