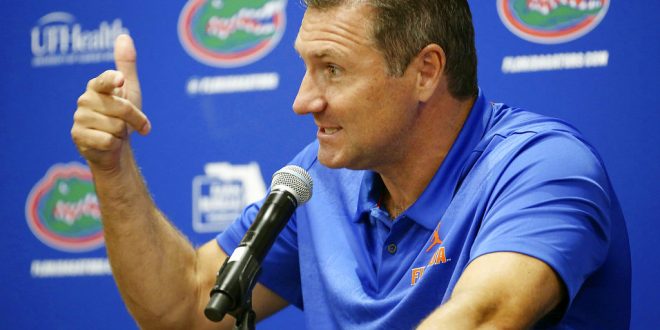 On Thursday, head football coach Dan Mullen kicked off the Florida Gators‘ Media Day. Mullen was asked about a wide variety of topics, including a few questions not relating to football. Here are the highlights of what Mullen had to say.

Addressing Problems Outside the Lines

When asked about C’yontai Lewis‘ previous association with a local gambler, Mullen had a broad answer. He did not go into specific details, but Mullen said the program is always concerned about who the players are around.

Along with addressing that incident, Mullen discussed the status of two players: Justin Watkins and Keivonnis Davis.

On top of the issues surrounding his team, Mullen was also asked about Urban Meyer, who he coached under at Florida. Mullen said he still has to find out more information about the situation with Meyer, who was placed on paid administrative leave on Wednesday.

With less than a month left until the Gators’ season opener, the team still does not have a starting quarterback.

At the moment, Mullen does not have a timetable for when he will make that decision. When he does make that announcement, he wants to be sure of who the backup will be as well.

Consistency Throughout the Program

As it pertains to the direction of the Gators, Mullen is looking to get the team back to winning consistently. Florida has a 60-45 record since 2010, with several up-and-down seasons during that stretch.

Maintaining the theme of stability, Mullen said that he is looking to see if quarterback Feleipe Franks can make the right play on a regular basis. Mullen cited Franks’ Hail Mary against Tennessee and his 79-yard run against Texas A&M as examples of his big-play ability.

PRAYERS ANSWERED AT THE SWAMP pic.twitter.com/jCEvFNj05z

What’s Next for Mullen & Company?

Mullen’s first game as head coach of the Florida Gators will come on Sept. 1. Florida will be taking on Charleston Southern at 7:30 p.m. in Ben Hill Griffin Stadium.

Previous The Urban Meyer Saga: What You Need to Know
Next UF Media Day: O-Line Coach Hevesy Looks For Efficiency in Offense