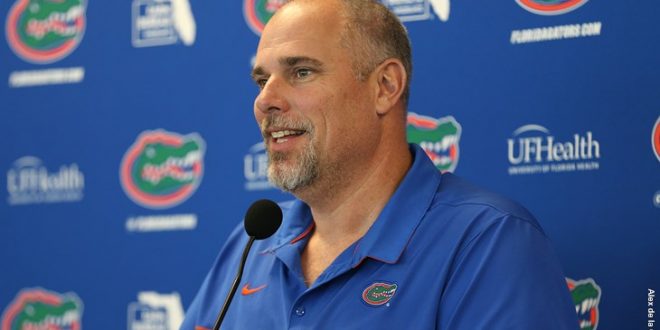 This is Hevesy’s second stint with the Gators. He worked under head coach Dan Mullen here from 2005-to-2008 and under him at Mississippi State for Mullen’s full tenure.

Last season, Mississippi State had the third best rushing attack in the SEC. The Gators, like most of their offensive statistics, were No. 10 in the league.

Hevesy knows the key to fixing that is to first become consistent.

The Gators averaged almost a full 100 yards less per-game than the Bulldogs did under Hevesy in 2017.

He Has Some Say in the QB Battle

Being the co-offensive coordinator, Hevesy sees and deals with the quarterbacks to a certain extent. His main focus is on their protection calls and working with the o-line.

Mullen and QB coach Brian Johnson will make the final call however. Kyle Trask, Emory Jones and Feleipe Franks are in a three-way battle for the job.

Mullen has stated he’s in no rush to name a starting quarterback and there is no timetable on the decision.

Each of the two transfer wide outs, Trevon Grimes and Van Jefferson, received waivers from the NCAA related to their immediate eligibility this season with the Gators.

Jefferson still needs his from the SEC, since he came from Ole Miss but should be eligible soon. Hevesy spoke about the experience he brings and what Grimes brings to the team.

Hevesy will try and be a part of a resurrected Gator offense after a few down years. If him and Mullen bring the same success they had running the ball from Mississippi State over, that success will follow for the offense as a whole.