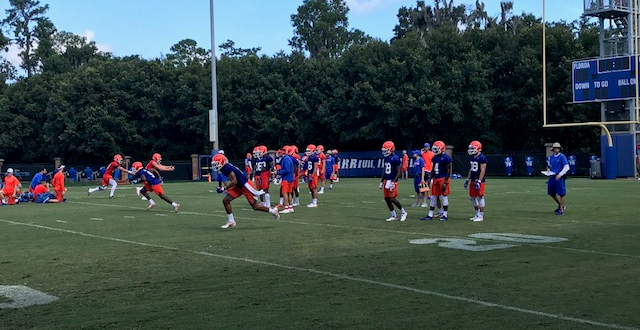 When taking Florida football’s DBU reputation into consideration, it is easy to wonder why the offense lags so far behind. In 2017, the Gators total offense ranked 109th out of a possible 129. (To put that into perspective, the total defense ranked 31st.) Long story short, the Gators needed an offensive rejuvenation.

The receiving corps deserved much of the blame, with 9 receivers and tight ends scoring just 8 touchdowns on less than 1800 yards in 2017. But, the Gators plan to leave that in the past. New coaches, new faces, new year. With fall camp underway, Florida’s receivers noted positive changes happening within their group.

Last season, receivers Tyrie Cleveland and Brandon Powell racked up more than 40 percent of Florida’s receiving yardage. All other receivers and tight ends accounted for another 46 percent. But, with Powell off to the NFL, Mullen made an effort to further out the new and returning group before the 2018 season.

Other returners welcome the competition, though.

Gators WR Daquon Green says of a newly stacked receiver group, “As long as everyone stays competitive, everyone should see the field”

The quarterbacks are also taking note of the good work receivers are putting in. Kyle Trask says the group is “one of the deepest groups” Florida has had in a while and “talent is showing.” Feleipe Franks echoed that, calling them “good assets to have both on and off the field.”

Wide receiver Trevon Grimes became immediately eligible to play for the Gators on Wednesday. But, in the seven months he has been in Gainesville, he seems to have fully embraced Gator Nation.

When asked about maximizing the group’s potential, Grimes had a simple response. “We [the receivers] have a saying: Pressure busts pipes, but not ours.” This means the group will push each other to their respective limits in order to get the best results for the team… and be happy about it.

On a lighter note, fellow new Gator Van Jefferson agrees with the phrase, although he was not familiar with it.

A balance of work and play is typically the right one. But, the Gators receivers will find out September 1st.