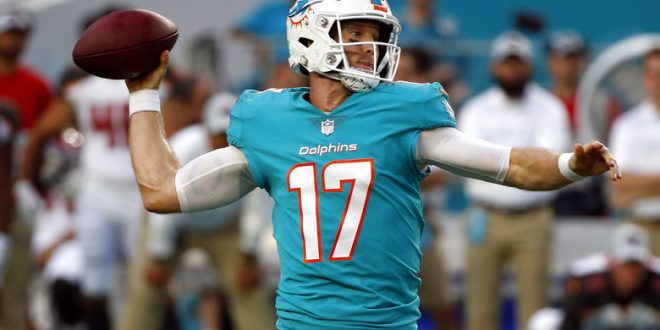 The NFL preseason is officially underway! Three in-state teams would take the field last night, including an all-Florida game in Miami. Here’s your look at the Miami Dolphins, Tampa Bay Buccaneers and Jacksonville Jaguars in preseason action.

Starting with the Jaguars, the preseason for them is about preparing for payback. They opened their preseason play against the New Orleans Saints at home. While the Jaguars would show promise, they fell to the Saints 24-20 at TIAA Bank Field.

One of the big storylines for Jacksonville is that of quarterback Blake Bortles. Would Bortles be able to carry his success from last season to another AFC Championship appearance? Bortles would see limited action against the Saints, only going six-for-nine for 53 yards. Receiving most of the playcalling under center was Cody Kessler.

Kessler would go 14-for-17 for 139 yards and one touchdown , while Tanner Lee went only four-for-eight for 38 yards. Bortles would score a two-yard rushing touchdown in the first, and Kessler would throw to Scott Orndoff in the third.

A Jonathan Williams run for a Saints would seal the win for New Orleans, but the Jaguars would put up a fight until the end of the game, as well as give fans hope that Bortles will be just fine heading into the season.

Bucs Raid Miami for a Win

Secondly, the Buccaneers would travel down I-95 to Hard Rock Stadium for a matchup against the Miami Dolphins. The big story from this game was that of Dolphins’ star quarterback Ryan Tannehill. Despite the return of Tannehill, the Dolphins were defeated by Tampa Bay 26-24.

After spending 606 days away from the game of football, Tannehill’s return was anticipated in South Beach. Seeing limited action, Tannehill went four-for-six for 32 yards before going to the bench for the rest of the game. Tampa Bay’s franchise quarterback, Jameis Winston, would see a little more action in the preseason battle. Winston went 11-for-13 for 102 yards.

The final two scoring drives of the game would come from Isaiah Ford and Chandler Catanzaro. Dolphins’ quarterback Bryce Petty would throw the last touchdown of the game to Ford for a six-yard touchdown, followed by a two-point conversion. The game would ultimately come down to a Catanzaro field goal for 26 yards.

About last night! Starting the season off right, what was your favorite play of the game?#GoBucs pic.twitter.com/w80bBBywHr

The Bucs and Dolphins also appear to be just fine with their quarterback situation, although Winston will be serving a three-game suspension at the start of the season. The Dolphins, however, will more than likely see Tannehill starting under center in week one against the Tennessee Titans in Miami.

The Dolphins will look to rebound on Aug. 17 with a road matchup against the Carolina Panthers. Meanwhile, the Buccaneers will take the road for a duel on Aug. 18 against the Titans. Thirdly, the Jaguars will make the trip to Minnesota for a preseason contest against the Vikings, also on Aug. 18. Finally, stick with ESPN 98.1 FM – 850 AM WRUF for more on the upcoming NFL season.