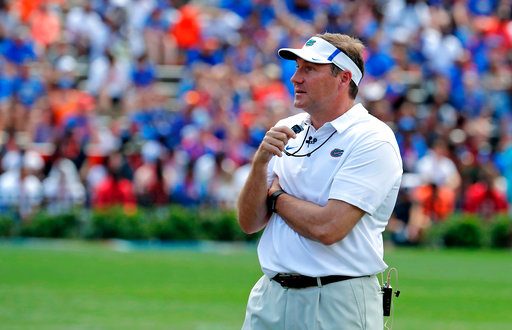 FILE - In this April 14, 2018, file photo, Florida head coach Dan Mullen watches play on the field during an NCAA spring college football intrasquad game, in Gainesville, Fla. Florida turned to its past to find a new head coach during the offseason, hiring Mississippi State’s Dan Mullen. The 45-year-old Mullen was the offensive coordinator at Florida when Tim Tebow was quarterback and helped the Gators win national titles in 2006 and 2008. (AP Photo/John Raoux, File)

The Gators’ head coach is looking for a particular kind of fight from the team. Mullen said that he likes the mindset and energy of his players, but he wants to see more mental toughness in terms of pushing through adversity. Mullen said mental toughness is a “learned behavior” and that he plans to put his team “in a lot of adverse situations” over the next two weeks.

No Starter at QB yet

Coach Mullen hasn’t given much information on who will start at quarterback for Florida. That didn’t change today. Mullen said that he’d “love to figure it out” but that he likely won’t name a starter until the entire offense is installed. Mullen also said he doesn’t want the decision to go into the week of the first game.

Mullen’s update on the offensive line is that he’s trying to create the right “depth of guys.” Mullen said that while he’s feeling “comfortable” with his first group, he still figuring out the rest of the rotation:

Gators Need to have “the Right Swagger” on Defense

One of the things Coach Mullen touched on was that he is encouraging his team to celebrate after big plays and celebrate when teammates make plays. He wants the Gators to “be physical every snap.” Mullen and his assistant coaches are focusing on playing with the “right energy, swagger and juice on the defensive side of the ball.

Counting Down to the Season

The Gators currently have a practice scrimmage scheduled for Monday, giving Mullen another great opportunity to evaluate where the team is at. The regular season is about three weeks away. The Gators will open the regular season at home against Charleston Southern on September 1st.