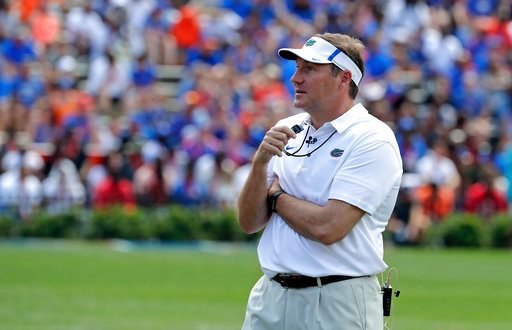 “I mean we’re all in this together as a team,” Florida head coach Dan Mullen said.

Training camp, special teams, position battles, depth building, and even Ron English’s grilling abilities were among some of the topics discussed Thursday afternoon when Mullen and defensive coordinator Todd Grantham met with media.

However, there was one thing that both of them touched on, in their own ways, that drove home Mullen’s mindset for the Florida football program.

It’s no secret that Mullen, his staff, and even the players want to build a program that’ll win. Over the last few months, Mullen and his coaching staff have talked about the ways they will structure this program to last and compete. Next up is focusing on the legacy the team will leave this season.

“We only have a couple more months to stamp it and then that’s it, that’s done, this team’s legacy is done,” Mullen said.

It sounds like a lot of pressure, but Grantham drove home Mullen’s vision by giving him major props. Grantham talked about how the new head coach looks at this team from all angles and doesn’t focus on just one side of the ball. Overall, “he has the big picture look,” Grantham said.

Florida will have its first opportunity to build that legacy when they take the field Saturday, September 1, for the season opener against Charleston Southern at 7:30 p.m.