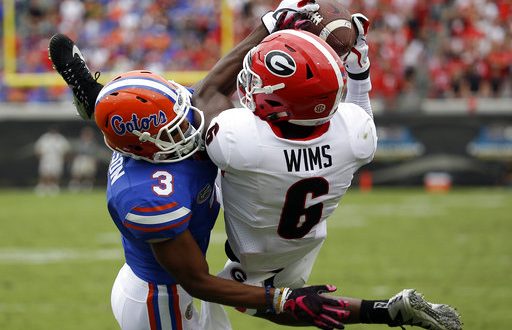 Georgia wide receiver Javon Wims (6) catches a pass in for a touchdown over Florida cornerback Marco Wilson (3) in the first half of an NCAA college football game, Saturday, Oct. 28, 2017, in Jacksonville, Fla. (AP Photo/John Raoux)

Cornerbacks have a huge role in Grantham’s defense. Grantham likes to run man coverage. This allows for more man-on-man situations. Sophomore Marco Wilson said the unit is ready to take on the responsibilities.

A major emphasis in this new system is forcing fumbles. In the last few years, this was not a focus. Wilson said forcing fumbles is now a top priority.

A new member to the cornerback room is sophomore Brian Edwards. Last season, Edwards played primarily safety. This was his position at Miramar High School. This year, the coaches moved him to corner. Edwards said he likes the change.

In his brief experience with the corners, Edwards said everyone helps each other out.

The safety position for the Gators is filled with young talent. These players haven’t proved themselves in an actual game. However, the group has impressed other members of the defense.

After spending a year at the position, Edwards knows the groups work ethic and talent. He spoke highly of the unit.

Like Edwards, Wilson praised the safeties. He is most impressed with the amount of quality safeties the team has been using in practice.

Freshman safety Trey Dean has caught the eye of his teammates. Dean is one of the many young defensive backs to make serious strides this offseason.

The chances of freshman Iverson Clement seeing playing time this year at running back is highly unlikely. He is way down the depth chart in a stacked position room. To fight for playing time, Clement has taken reps on the defensive side with the safeties.

Edwards said the transition for Clement to safety was made easier by his skill set.