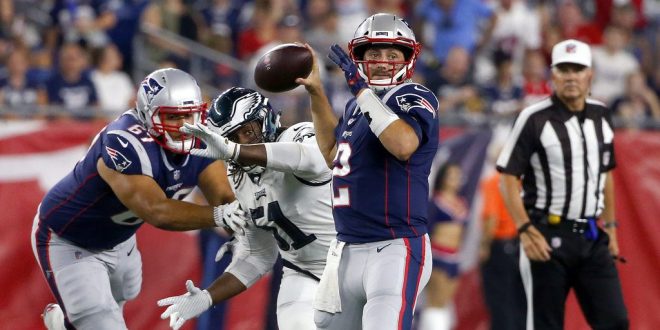 Week 2 of the NFL preseason brought confusion to many fans, officials and players. The controversial new helmet rule penalty is to blame for this confusion. It’s so far been called 51 times in the span of just 2 weeks, an average of 1.5 penalties per game, and 43 of those penalties were called on the defense. The NFL has realized the confusion due to players’ tweets showing their frustration with the new rule.

There is no “make adjustment” to the way you tackle. Even in a perfect form tackle the body is led by the head. The rule is idiotic And should be dismissed immediately. When you watch rugby players tackle they are still lead by their head. Will be flag football soon.

The NFL will issue an updated explainer video for officials and teams for a further explanation.

Other than that, we’ve seen the top rookie quarterbacks perform to their expectation. That includes Baker Mayfield who’s on an absolute tear with the Browns.  Josh Allen looks extremely comfortable with the Bills thus far. Lamar Jackson has reached an ultimate Michael Vick comparison with his nifty footwork for the Ravens. Sam Darnold has held up his potential with the Jets and seems to be pushing Teddy Bridgewater out the door. And Josh Rosen finally got protection from his Cardinals O-line which translated to a solid production.

Furthermore, week 3 of preseason action is known for giving starting players more action on the field. Usually first team offense and defense will amount to playing half of the game, which means that fans will see what their teams will have to offer for this upcoming regular season.

You know it’s a preseason game when the Browns are three-point favorites over the defending Super Bowl Champions on Thursday night.  Super Bowl 52 MVP Nick Foles will start for the 0-2 Eagles but with some injury restrictions. He left last week’s game against the Patriots with a shoulder strain. On top of that, the Eagles top running backs like Jay Ajayi, Corey Clement, Donnel Pumphrey and Darren Sproles will most likely sit out as well. Which leaves Wendell Smallwood and Matt Jones available for playing time. Their wideout situation doesn’t look so good either for this Thursday night game. Alshon Jeffrey, Nelson Algholor or Marcus Wheaton won’t be in the lineup either, which leaves Shelton Gibson and rookie tight end Dallas Goedert available.

The 1-1 Browns on the other hand are extremely healthy compared to the Eagles. Both Mayfield and Tyrod Taylor are playing better than expected, which leaves the Browns in one of their better quarterback situations in over a decade. Taylor will play the entire first half with the ones. Mayfield will split the playing time with the entirety of the second half. Although, this will be the toughest defense the Browns will see this entire preseason, but the Browns have almost all their studs out on the field which will make this a fun game to watch. Josh Gordon will be returning soon.

This will be the 50th preseason game between the two teams, making it the longest exhibition rivalry in the NFL. The Giants are 1-1 in  the preseason with an improved roster after an addition to their backfield with rookie sensation Saquon Barkley. Although, Barkley won’t play due to an ongoing hamstring injury. Their addition of Nate Solder to their offensive line has finally given more time for quarterback Eli Manning to throw the ball without getting sacked. Odell Beckham and Sterling Shepard have proved to be a great wide receiver duo for the Giants as well as starting tight end Even Engram who will be entering his second season. Here’s Barkley talking about his ongoing process with his hamstring injury.

Coach Shurmur recaps today's #GiantsCamp practice and looks ahead to Friday's matchup with the Jets. pic.twitter.com/aGgZLHCVGd

The 1-1 Jets are still giddy that the Giants let Darnold fall to No. 3 in the 2018 draft, and they have the Giants to thank for that. Darnold has been outperforming the other quarterbacks involved in the fight for the starting job. Bridgewater and Josh McCown are considerably old in their forte compared to the rookie sensation. The Jets’ wideouts have enjoyed the passing game with Darnold under center. Wide receivers Jermaine Kearse and Robby Anderson have been playing well this pre season and Anderson ahd a breakout season last year. If Darnold gets the starting job in the regular season and Anderson outperforms himself from last year, you might be looking at one of the two AFC Wildcard teams.

Tom Brady and the Patriots are looking to stay undefeated in preseason play as a small 1-point underdog this Friday. Brady had a solid outing last week against the Eagles after a 172-yard, two touchdown performance. Although, Brady has struggled in the past against the Panthers winning only two of five outings in his career. The Patriots lost Danny Amendola in the offseason to the Miami Dolphins, but still look like heavy favorites to dominate the AFC East. Who knows? Maybe they’ll just make the Super Bowl again making it seem like no big deal.

The Panthers are also undefeated this preseason. Their best players have shown up , like Christian McCaffrey who scored on a 72-yard running play against the Dolphins two weeks ago. Torrey Smith and Greg Olsen are healthy and ready to go this season. Fans are happy to hear that Olsen is back after he sustained a terrible foot injury that left him out for seven games last season. The Panthers believe he’s back to his usual self as they signed him on a $17.1 million contract through 2020.

That one-handed grab from 8️⃣8️⃣ pic.twitter.com/nEHvtM0eza

There’s no doubt that Russell Wilson is arguably one of the best quarterbacks in the league, but what about the Seahawks wideouts? Well they’re currently battling it out on the practice field. And no, not Doug Baldwin or Tyler Lockett, we’re talking about the bench warmers like new signee Jaron Brown, David Moore and Cyril Grayson Jr. Baldwin and Lockett already have their starting jobs set in stone after a great 2017 season but watching these young studs go all out in a wide receiver battle will make this preseason enjoyable for passing game lovers, especially against the tough Vikings defense.

The Vikings were great last year with case Keenum last  season after going all the way to the NFC Championship. But, all of that is said and done and they’ve officially moved on. They sending Keenum to the Broncos and acquiring Kirk Cousins from the Redskins. The Vikings have struggled to stay healthy this preseason but they will have reinforcements with the return of right guard Mike Remmers and right tackle Rashod Hill. Only starting left tackle Riley Reiff has played in both preseason games which means the o-line has had a lot of health issues. Cousins mentioned he enjoys the returning linemen and that they’re a “big asset.” It also looks like this could be the week that running back sensation Dalvin Cook will see the field for the first time since his devastating season ending injury last season.