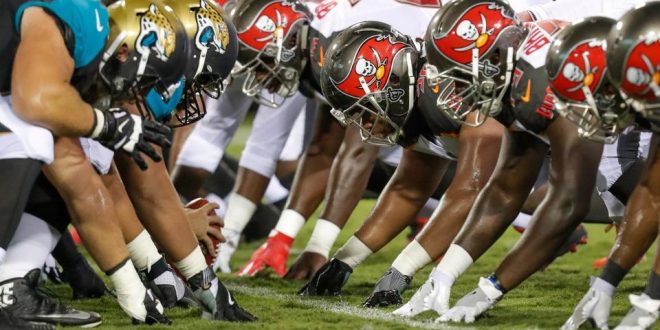 source and credited to floridanationalnews.com, photo by Tampa Bay Buccaneers 2017.

It’s officially Week 4 of the NFL preseason, which means that the regular season is just around the corner. Teams must cut their roster to 53 men by 4 pm ET on Saturday, Sept. 1. Which means that many bench players will try to shine and play to their best of abilities this upcoming Thursday when the Jags visit the Buccaneers at Tampa Bay.

Both of these teams have had roster struggles within the last couple days or so. First, the Bucs’ starting quarterback Jameis Winston, has officially played his last preseason game this season and won’t be suiting up until September 30, when they face the Chicago Bears. The NFL gave Winston a three-game suspension for allegedly groping an Uber driver in Arizona back in March of 2016. Mind you, that’s one game less than what Tom Brady received for a deflated football. Winston finished his last preseason game against the Detroit Lions on a good note, going 6 of 10 for 60 yards, including a 10-yard TD after just one-quarter of action.

Jameis Winston has been the NFL's highest graded quarterback so far this preseason. pic.twitter.com/KUWYpFmDI3

The NFL will begin their exile of Winston which means he can’t even have communication with the team before September 30. The Buccaneers will go all in on veteran quarterback Ryan Fitzpatrick for the first three games of the season.

Jameis Winston with a CRAZY touchdown pass to Chris Godwin.pic.twitter.com/igzQrIBtPD

As you can see, Fitzpatrick has been the delta in the quarterback situation so far. Even third-stringer Ryan Griffin has outperformed 14-year veteran Fitzpatrick in one of the preseason games. In the end, the Bucs have to work with what they have before Winston can come back on the field for them in late September.

Unfortunately, no one wants to hear about a season-ending injury. But, Marqise Lee will be placed on Injured Reserve for the remainder of the season after suffering a gruesome knee injury against the Falcons. Safety Demontae Kazee tackled Lee and made his knee bend in an unnatural way before hitting the ground.

Marqise Lee is out for the season.

Now the other receivers have to step up in his absence. pic.twitter.com/YWBC9UycXG

Kazee was penalized for lowering his helmet on the play. Lee was carted off the field and many speculated the worst. Here’s what head coach Doug Marrone had to say about Lee’s injury, according to MSNsports.com.

“Obviously it’s a loss for us,  Marqise brought a level of toughness to that room. He was obviously a very productive player the past, specifcially on third down.”

26-year-old Lee had a team-high 56 receptions last season and was second on the team with 702 receiving yards. Lee had just resigned with the Jaguars back in March on a four-year contract worth $34 million. But, now that he’s out of the picture, second-year players like Dede Westbrook and Kealan Cole will be forced to see more minutes. You can also throw in free agent signee Donte Moncrief into the picture, as well as second-round draft pick D.J. Clark.

There’s also been speculation on whether the Jaguars should sign free agent and former Cowboys wide receiver Dez Bryant to fill in the role. But that’s all speculation as of right now. We’ll just have to wait and see what happens after the last preseason game of the season.

Recent grad from the University of Florida. Editing all articles on here while helping out the newbies. Love all things basketball.
@@MarcoJMartinez_
Previous Spurrier Speaks on Florida’s Season Opener
Next Gators Wide Receiver Hammond Confident Ahead of Season Opener