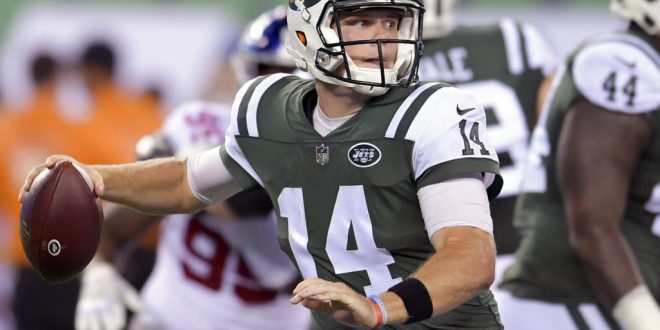 New Faces at Quarterback in Week 1 of NFL Season

It’s finally the first week of the NFL season and for some guys a step up into a big role: starting quarterback. There are some fresh new faces at the quarterback position and some more familiar ones, but here are some of the guys that are ready for their role in the upcoming games this week.

The New York Jets have a brand new face of the franchise as they announced that rookie Sam Darnold would be the starting quarterback for the team Monday. Darnold will soon become the youngest opening-day quarterback in NFL history at just 21 years old. This is a pretty big turn around for the Jets who had Josh McCown last year, who was of the oldest quarterbacks in the league at 39 years old. Jets Head Coach Todd Bowles had some good things to say about Darnold in the position on Monday.

Although not an unknown face for Buffalo Bills fans, it was debated in the offseason whether rookie Josh Allen would be the starting quarterback or not for the franchise. However, it seems Peterman still won the job despite some issues last season. This preseason has been a good one for him though, completing 33 of 41 passes for 431 yards, three touchdowns, and one interception. Peterman said he was happy to have the job.

Now Tyrod Taylor has the starting job for the Cleveland Browns right now, but rookie Baker Mayfield is right behind him ready to play when necessary. Mayfield saw some playing time in the preseason, but the Browns were committed to having Taylor be their guy for this season.

However, Mayfield is the quarterback of the Browns future, the No. 1 pick of this year’s draft, and still could see some playing time this season.

Now Nick Foles is in no way a rookie, but he hasn’t been the main guy for the Philadelphia Eagles either. Carson Wentz is still recovering from his ACL tear in his left knee so it seemed like Foles could be the starter for a few games. Eagles Head Coach Doug Pederson officially announced it Monday that Foles would be the starting QB for the team.

“He put jewelry on our fingers.” The team is set to go with Nick Foles. More on #Eagles 360 presented by @Xfinity: https://t.co/wMd5xDfgBs

Courtney Mims is a junior telecommunications major at the University of Florida. She enjoys covering all Gator sports and drinking gallons of Starbucks coffee while doing so.
Previous Recruits Attend the First 2018 Gator Game Day
Next Florida looks ahead to 31 game win-streak against Kentucky