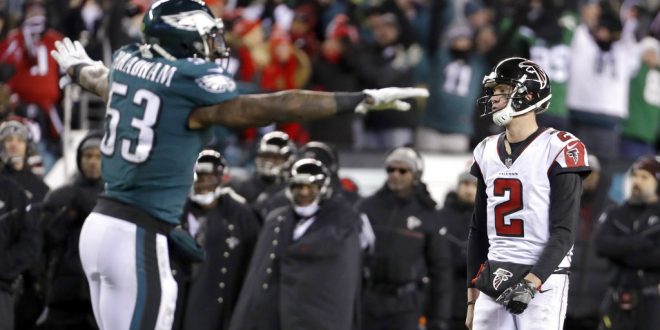 FILE - In this Jan. 13, 2018, file photo, Atlanta Falcons' Matt Ryan and Philadelphia Eagles' Nigel Bradham react after Atlanta cannot score on fourth and goal during the second half of an NFL divisional playoff football game, in Philadelphia. The Eagles have a tough opponent Thursday night in the NFL opener. The Atlanta Falcons were 2 yards away from knocking the Eagles out of the playoffs in the divisional round but Matt Ryan's pass to Julio Jones fell incomplete in the right corner of the end zone. (AP Photo/Chris Szagola, File)

The 2018 NFL Season Kicks Off with Atlanta and Philadelphia

It’s been a long off-season, but it’s finally here. The 2018 NFL season begins tonight as the Atlanta Falcons travel to the City of Brotherly Love to take on the Super Bowl Champion Philadelphia Eagles. The teams last faced each other in the NFL Divisional Round of he playoffs last season, where the Eagles ended the Falcon’s season with a goal-line stand. It’s a new season however, and both bird-mascot teams have questions to answer and things to prove.

The Quest for Title Defense

The Philadelphia Eagles achieved what seemed like the impossible last season. Despite having the best record in the NFC, their playoff outlook looked bleak due to a key injury. Starting quarterback Carson Wentz suffered an ACL injury in early December, sidelining him for the rest of the season. The Eagles then turned to backup Nick Foles, but there was doubt from all sides. Foles went on to win two of the last three games and guided the Eagles through the playoffs (past the Falcons) to the Super Bowl. Then, after playing the game of his life, Foles and the Eagles emerged victorious. The Philadelphia Eagles were Super Bowl Champions for the first time ever.

Now begins the hard part: life as the defending champions. There’s even more of a target on Philadelphia’s back, especially with Atlanta coming to town Week 1. Statistically over 70% of Super Bowl Champions have a worse win-loss record the following year. The Eagles have tried their best to prepare for that, adding pass-rusher Michael Bennett in the off-season on top of a solid draft class. Still, there are obstacles.

Eagles name Nick Foles as Week 1 starter over Carson Wentz; "It was in the best interest” of the team pic.twitter.com/8OE71ok7nS

Carson Wentz is still recovering from his ACL injury and is not fully cleared for contact. Nick Foles will get to start again for the team, but there is concern there too. Foles suffered a minor injury to his throwing shoulder in the preseason, and it remains to be seen how much that will impact his performance. The Eagles can certainly repeat as NFL Champions this season, but they need Carson Wentz and Nick Foles both at full strength to do it. In Week 1, the outcome does not look bright.

A Chance for Revenge

The Atlanta Falcons had an up-and-down season in 2017. After losing the Super Bowl in dramatic fashion in 2016, they did not look like the same team. Offensive coordinator Kyle Shanahan left to take the San Francisco 49ers head coaching job, and replacement Steve Sarkisian was not nearly as explosive. Despite looking outmatched in games against top-tier opponents, the Falcons backdoored their way into the playoffs. They defeated the Rams in Los Angeles, and advanced to Philadelphia. They lost and their dream to avenge the 2016 Super Bowl was lost with it.

The Falcons can still get revenge however, as they go north to take on the Eagles, the team that knocked them out. The Falcons boast a young defense and serious skill talent on offense, but just need their offensive coordinator to put it all together. If the Falcons can do that, they may have a chance for revenge. A chance is all they ask for.

This game looks to be a close one, with Philadelphia having to deal with possible quarterback issues and the Falcons looking healthy. The Eagles are a 1-point favorite at home, which goes to show how much the public doesn’t know about this game.

The rosters for both teams are very talented, and it’s hard to find individual spots where one team takes the cake. The winner of this game will not be decided by the rosters however, but by the coaches. Falcons head coach and defensive mastermind Dan Quinn will have his hands full trying to stop Eagles head coach Doug Pederson, who is an excellent offensive play-caller. The Falcons defense was able to severely limit the Eagles offense last season, but it did not prove to be enough. Can it be this year?

If it can, the Falcons start the NFL season 1-0 and get their revenge. If it doesn’t, the Eagles continue undeterred on their quest to defend their title.

The rest of the NFL action is on Sunday. Here are some of the other opening weekend matchups: