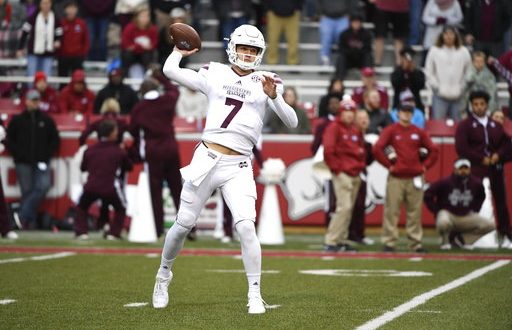 The Joe Moorhead era kicked off last weekend for the Mississippi State Bulldogs and it will continue Saturday for a Power 5 matchup at Kansas State. The No.18 ranked Bulldogs will look to keep their momentum going against the Wildcats at 12 p.m. ET on ESPN.

Week 1’s game against Stephen F. Austin proved to be an easy win for the Bulldogs with a final score of 63-6. With an entirely new coaching staff, Moorhead was pleased with how the team played. This week’s game will be Moorhead’s first nonconference Power 5 game since 2008 and he says he’s excited for the opportunity.

Even though last week’s offense was explosive, it was missing quite the ingredient in Nick Fitzgerald under center. After serving his one game suspension for violating team rules back in March, he is expected to take the start for the Bulldogs on Saturday. In case you have forgotten who Fitzgerald is or what he is capable of, his 2017 season numbers will prove a whole lot.

Fitzgerald is well on his way, in fact only about 500 yards away to beating Gator great Tim Tebow as the SEC’s all time QB leading rusher. Even though he wasn’t on the field, Moorhead said that he still acted as a great resource on the sidelines reading different plays.

As for Moorhead’s new style compared to previous head coach, Dan Mullen, Moorhead still thinks that Fitzgerald is an excellent fit for the team systematically.

Last week’s game against South Dakota was a come from behind win for the Wildcats. Kansas state came up on top with a final score of 27-24.  The Wildcats trailed by 12 going into the fourth quarter. However, they found a new breath thanks to junior wide receiver Isaiah Zuber. His late game 85-yard punt return and game winning 10-yard receiving touchdown made him the Big 12 special teams player of the week.

Just one game into the season, Zuber has shown his consistency from last year. In the 2017 season he led the team with 51 receptions for an outstanding 510 yards and four touchdowns. Mississippi State’s defense will have to figure out how to stop Zuber early. Kansas State’s defense isn’t too comparable to their opponents last week in Stephen F. Austin.

With the new Bulldog staff, Wildcat hall of fame coach Ben Snyder, Nick Fitzgerald under center, and Isaiah Zuber’s momentum, this will be a matchup to watch.  Kickoff is scheduled for 12 p.m. EST on Saturday at Bill Snyder Family Stadium.

Junior studying telecommunications- news at the University of Florida. Multimedia Sports Reporter for ESPN Gainesville as well as a Multimedia Journalist for WUFT News.
@acheney21
Previous The 2018 NFL Season Kicks Off with Atlanta and Philadelphia
Next Texas A&M To Host Clemson and Top D-Line In the Country