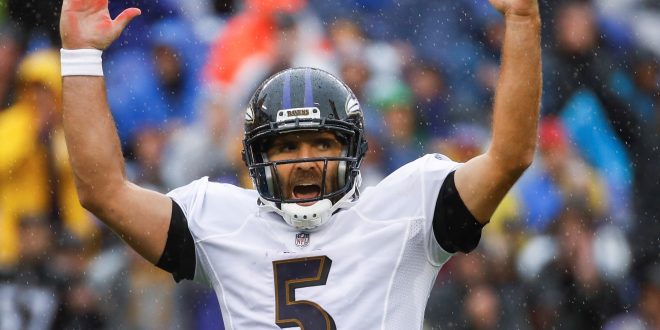 FILE - In this Sunday, Sept. 9, 2018, file photo, Baltimore Ravens quarterback Joe Flacco (5) celebrates his touchdown pass to wide receiver John Brown during the first half of an NFL football game against the Buffalo Bills, in Baltimore. Against the Bills, Flacco went 25 of 34 for 236 yards and three TDs. In Week 2, Flacco and the Ravens take on the Cincinnati Bengals. (AP Photo/Patrick Semansky, File)

The rivalry continues with the Baltimore Ravens and the Cincinnati Bengals tonight. Both teams are entering this game with an impressive week-one win. The winner of this game will have a chance to become ranked first in the AFC North. Kickoff begins tonight at 8:20 p.m. at Paul Brown Stadium in Cincinnati.

The Ravens put on a show this past Sunday as they defeated the Buffalo Bills 47-3. They came out strong during the first quarter of the game with RB Alex Collins driving through the Bills defense with an 8-yard touchdown.  The Ravens defense also seemed to be unstoppable throughout the game, as Buffalo was not able to earn a first down within the first half of the game – a first since 2001.

Bengals head coach Marvin Lewis has been watching the Ravens all preseason as they went 5-0. Lewis recognizes the talent that the Ravens possesses going in tonight’s game.

2012 SuperBowl MVP Joe Flacco is officially back in action. Flacco had three touchdown passes against the Bills and not a single interception. The quarterback is looking better than ever going 25-for-34 for 236 yards and a pass rating of 121.7, which is his best in four years.

Flacco acknowledges the Bengals are a tough team to face.

The Bengals defeated the Indianapolis Colts 34-23 this past Sunday. Coming off of an unfortunate 7-9 season, the Bengals currently stand at fourth in the NFL for yards per play as well as second in the NFL for yards per rush after week one. Last week’s game was a test for the Bengals. Head coach Marvin Lewis believes that they need to continue improving off of week one and have the defense on the same page. Joe Mixon was a weapon against the Colts as he ended with 17 carries for 95 yards along with a touchdown. Head coach Marvin Lewis credited Mixon for doing a good job of getting in and out.

It’s expected to be a close matchup as the Baltimore Ravens and the Cincinnati Bengals go into tonight’s game. With the Bengals knocking out the Ravens in last years playoffs, the Ravens are looking to make a strong comeback. Kickoff starts tonight at 8:20 p.m. in Cincinnati, Ohio.