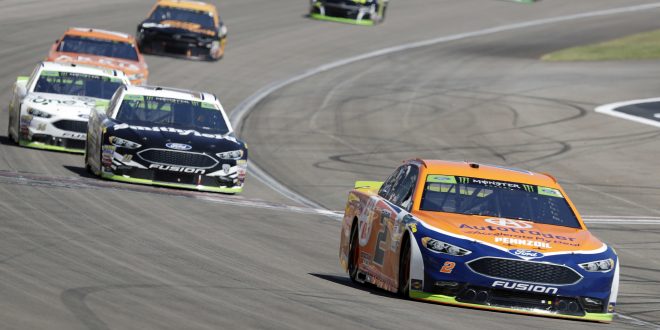 The saying goes, “what happens in Vegas, stays in Vegas.” However, for NASCAR driver Brad Keselowski, what happened in Vegas will set the tone for the rest of the NASCAR postseason. Keselowski captured the first checkered flag of the 2018 NASCAR Playoffs at the Las Vegas Motor Speedway in the South Point 400. Keselowski has been driving strong lately and could be a sign of things to come.

It takes a team and @keselowski recognized that after the win on Sunday. #GoingFor2 pic.twitter.com/zlhMuIOUZ9

Keselowski winning the first race of the Playoffs is no surprise, especially given his recent success. Keselowski has won three straight races. It took an overtime for the No. 2 car to get the checkered flag. In the overtime, Keselowski soared past the competition. Keselowski attributed the win to an efficient performance by his pit crew. With the win, Keselowski secured the 500th win for owner Roger Penske. Penske was not in attendance in Vegas for the milestone. Instead, he watched from the IndyCar season finale in Sonoma.

His last season surge has created some intrigue for the rest of the playoffs. For most of the season, the Big 3 of Martin Truex Jr., Kevin Harvick and Kyle Busch dominated the season, winning 18 combined races this season.

What a milestone for @Team_Penske. 500 wins in @IndyCar and @NASCAR, and all racing series for the organization. A happy team owner celebrates in Sonoma! pic.twitter.com/JAoGa97lP7

In any sport, the postseason amps up the difficulty for athletes. In the postseason opener in NASCAR, mother nature made things even more difficult for the drivers. The scorching Las Vegas heat hit 99 degrees for Sunday’s race. The brutal heat made the track even slicker and caused damage for several drivers.

Wrecks are even more damaging for drivers this season given the new elimination format for the postseason. Kevin Harvick led the series in victories this series with seven. He wasn’t anywhere close to a victory to open up the postseason. A blown tire on Lap 148 forced him to spin out and slam into the wall on the first turn. Harvick was eliminated and finished 39th. Pole winner Erik Jones was also eliminated when he hit Harvick’s car in the crash.

On Lap 212, Jaime McMurray spun out and took Chase Elliott with him. Elliott finished in 36th place.

On the ninth caution of the afternoon, Denny Hamlin spun off the fourth turn on Lap 247. This led to a restart where Keselowski took the lead from Kyle Larson for good. If this wreck didn’t happen, some believe it would’ve been Larson in victory lane.

Johnson, Elliott, Erik Jones and Denny Hamlin are the four drivers on the brink of elimination.

.@jamiemcmurray with a big slide that collects another #NASCARPlayoffs contender, @chaseelliott.

Coverage continues on @NBCSN and the @NBCSports app: https://t.co/BHXvTwrLoC pic.twitter.com/xSuLd39rPW

The second race of the NASCAR postseason will take place in Richmond, Virginia for the Federated Auto Parts 400 this Saturday at 7:30 p.m.