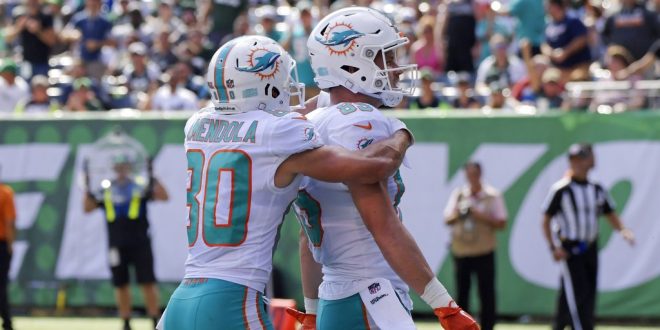 Through the NFL’s first two weeks of its season, the Miami Dolphins are in first place in the AFC East.

After taking down their AFC East-rival New York Jets, the Dolphins now hold a 2-0 record and look the part of an early playoff contender.

FINAL! We're bringing the W back home with us!#FinsUp pic.twitter.com/6dMGmbUnXS

The Dolphins were rolling in the first half of their matchup against the Sam Darnold and the Jets.

After two unsuccessful drives to start off the game, Miami’s defense came up big. With about three minutes left in the 1st quarter, Dolphins safety T.J. McDonald picked off a pass from Darnold and brought it deep into Jets territory.

This turnover gave the Miami offense great field position, which eventually led to a six-yard touchdown run by Kenyan Drake.

The second quarter was even better for the Dolphins, as they scored two touchdowns while still holding New York scoreless. After Dolphin’s recovered a fumble after a big hit from linebacker Kiko Alonso, Ryan Tannehill hit Albert Wilson on a crossing route and watched him run for a 29-yard touchdown reception.

Later in the second quarter, Miami was able to put more points on the board. With less than a minute left in the half, Tannehill connected with tight end A.J. Derby for a 19-yard touchdown pass.

The second half did not see the same offensive success for Miami. The defense, however, stayed strong.

After giving up a touchdown in the first drive of the second half, the Dolphins defense came up with another turnover. Miami again intercepted a pass from Darnold, this time with Xavien Howard picking the ball off in the end zone to prevent a Jets score.

The Jets were able to kick two field goals to make the score 20-12, but a conversion on third-and-19 by the Dolphins in the fourth quarter highlighted an almost six-minute drive to run the clock out.

Miami’s Tannehill was efficient on the day, completing 17 of 23 passes for 168 yards and two touchdowns. While he did not throw any interceptions, he did fumble the ball for a turnover.

Sam Darold did not have the same success he had in his NFL debut. He did throw for 334 yards while completing 25 of 41 passes and a touchdown. However, he threw two interceptions, including one in the back of the end zone to spoil New York’s good field position.

The defense came up huge for the Dolphins, forcing three turnovers and holding the Jet’s run game to only 42 yards. When asked about his teammates on the defensive side of the ball, Tannehill had this to say:

Frank Gore‘s eight-yard run in the third quarter moved him past Curtis Martin for fourth on the NFL’s all-time rushing yards list.

Gore reflected on his accomplishment, saying:

He finished the game with 25 yards rushing on nine attempts and one reception for 19 yards.

The Dolphins will head back to Miami to play the Oakland Raiders for a 1 p.m. game on Sunday.

The Jets will have a short week, as they will travel to Cleveland to play the Browns for Thursday Night Football.

Jonathan is a sports journalism student at the University of Florida. He enjoys videography, editing, photography, and writing.
Previous Brad Keselowski’s Win Streak Continues in First Race of NASCAR Playoffs
Next Around the NFL: A Surprise Retirement, an Emerging Star, Floundering Kickers and Another Tie