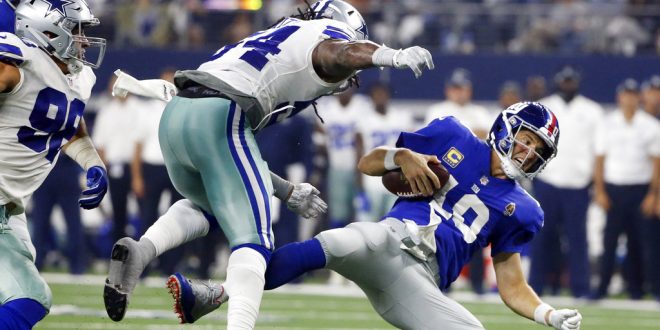 Cowboys Rough Up Manning in 20-13 Win Over Giants

On the Cowboys’ third play from scrimmage Sunday night against the Giants, Dak Prescott found a streaking Tavon Austin over the top of New York’s defense.

Austin was off to the races, and so was Dallas. Austin’s 64-yard touchdown gave the Cowboys a lead they wouldn’t give back. Dallas led wire-to-wire en route to a 20-13 win over New York in this early NFC East showdown.

Leading up to the game, Giants safety Landon Collins said his team had a better chance to win if it forced Prescott to throw.

Prescott said he accepted the challenge.

“I mean, we definitely hear that,” Prescott said. ” I kind of said the challenge accepted, I said I accepted it, I wasn’t the only that accepted that challenge.”

An efficient offense and a physical defense set the tone for the Cowboys. They sacked Eli Manning a total of six times for 59 yards and held the Giants to just 255 yards of total offense and one turnover. The men in blue’s only bright spot on offense was the continued good play of rookie running back Saquon Barkley, who had 14 catches for 80 yards out of the backfield.

Ezekiel Elliot again led the way on the ground, with 17 carries for 78 yards and a touchdown. His six-yard scamper halfway through the fourth quarter gave Dallas a 20-3 lead that put the game out of reach for Manning and company.

New York’s only touchdown in the game came late as a consolation prize. Manning connected with tight end Evan Engram on an 18-yard score with 1:27 left to play to cap an 11-play, 75-yard drive that pulled them to within 20-10.

The win improves Dallas to 1-1. On the flip side, the loss drops the Giants to 0-2 and an early last place standing in the NFC East.

Native New Englander. Follow me on Twitter: @jonacosta_10
@jonacosta_10
Previous Around the NFL: A Surprise Retirement, an Emerging Star, Floundering Kickers and Another Tie
Next MLB Playoff Races