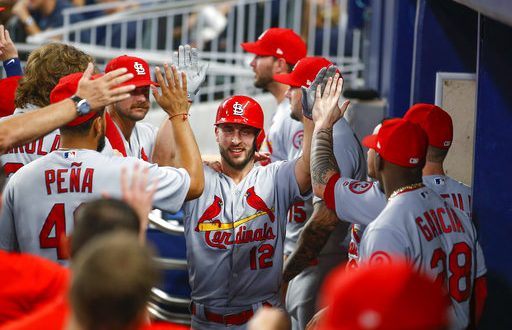 St. Louis Cardinals' Paul DeJong (12) is congratulated by teammates after his two-run home run during the fourth inning of a baseball game against the Atlanta Braves, Tuesday, Sept. 18, 2018, in Atlanta. (AP Photo/Todd Kirkland)

MLB Pennant Races As Close As Ever

With only a little over a week left in the MLB regular season, the playoff picture is still a little fuzzy. Only the Cleveland Indians have clinched their division, and the Boston Red Sox have clinched a playoff spot.

The AL East is pretty much decided with the Red Sox 9.5 games up on the second-place New York Yankees. And even though Boston hasn’t officially clinched yet, the Yankees have just 12 games left to try to erase that deficit.

Meanwhile, the AL Central has been decided, as Cleveland leads the Minnesota Twins by 14.5 games. The Indians are the only team who can celebrate a division title at this point.

The closest race in the American League right now is in the AL West. The Houston Astros are four games in front of the Oakland A’s with ten games left to play. Houston has dropped two of its last three games, while the A’s have lost three of their last four. The Astros have the Angels, Blue Jays, and Orioles left on their schedule. Oakland’s remaining schedule, meanwhile, includes the Angels, Twins, and Mariners.

Unlike the American League, a lot is still up in the air for the National League. The NL Central and NL West feature the closest races with three teams in the mix for both divisions. The Cubs, Brewers, and Cardinals are all in the thick of things for the NL Central. The Chicago Cubs currently lead the division and are 2.5 games ahead of the Milwaukee Brewers and 5.5 games in front of the St. Louis Cardinals.

Chicago has ten games left to play, while the Cardinals and Brewers both have nine. St. Louis might have the toughest path ahead of them — they close out their season with two three-game series against Chicago and Milwaukee.

Meanwhile, the NL West is just as close, as the LA Dodgers, Colorado Rockies, and Arizona Diamondbacks are all in contention. LA leads the division with Colorado sitting 2.5 games back and Arizona six back.

The Rockies have ten games remaining on their schedule, while their two division opponents both have nine games left. Six of Arizona’s remaining games are head-to-head matchups with LA and Colorado, which will be pivotal in determining where they end up in the standings. The other team they’ll be facing is the Padres. In addition to Arizona, the Dodgers will also be playing San Diego, as well as San Francisco. And the Rockies have the Phillies and Nationals left to play once they get through the Diamondbacks.

The National League division that’s the most settled right now is the NL East. The Atlanta Braves have a 5.5 game lead over the second-place Philadelphia Phillies. The Braves have 11 games left on their schedule, while the Phillies have ten remaining. Seven of each team’s remaining games are head-to-head matchups, so a lot can, and probably will, change between now and the end of the season.

With so many of the division races so close, the wild card races are even closer. The NL race seems to change every day, but as of now, the Brewers hold the top spot, and the Cardinals have a 1.5 game lead over the Rockies for the second spot.

Over in the AL, the wild cards are more locked in, but nothing has been clinched. The Yankees hold the first spot, and the A’s are 5.5 games ahead of the Tampa Bay Rays for the second.

The season will be ending for most teams on Sept. 30, but even though there’s not much time left, there’s still a lot of moving pieces and a lot to be decided. But however it shakes out, postseason play will begin Oct. 2 with the NL Wild Card game.