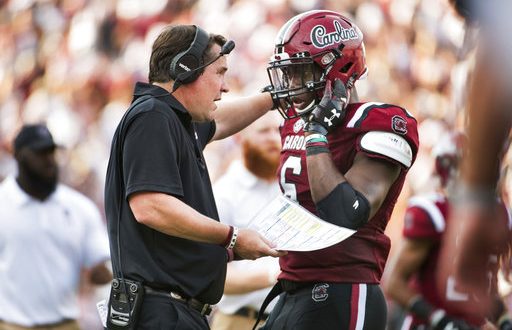 Gamecocks Look to Shake off Rust Against SEC Rival Vanderbilt

Two SEC Eastern Division Rivals will be going head to head this Saturday as the South Carolina Gamecocks will be taking on the Vanderbilt Commodores. South Carolina is going into this weekend’s game with a 1-1 record. Their game last weekend against Marshall was cancelled due to Hurricane Florence.  The Gamecocks will encounter their first road game of the season at Vanderbilt Stadium. They have had plenty of success winning their last 12 out of 14 games at Nashville. It has been 10 years since Vanderbilt won against the Gamecocks on their home turf.

Head Coach for South Carolina, Will Muschamp, seemed very confident and excited for his team’s upcoming game even though they haven’t played in two weeks. That gave his team the extra week of rest and preparation. Even with recent success against Vanderbilt, Muschamp acknowledges how the Commodores have plenty of their own talent as well.

Commodores Ready for a Grit and Grind Game

Vanderbilt head coach Derek Mason is already in his fifth year at the helm and is coming off a loss to Notre Dame but his team is still third in the SEC East. Even though he knew his upcoming opponent had an extra week of rest, he still used this week for practice and preparation knowing that South Carolina plays a very physical game.

The Commodores look to change the tides on this division rivalry. It all starts and ends with how the team works together. Mason described that he feels better going into this week’s game knowing he will have his core players healthy again. On the defensive end, Mason has recognized how much depth the Gamecocks have at the wide receiver position. He mentioned, that South Carolina has two number one receivers.

Kickoff for this game is at 4p.m. and it will be televised on the SEC Network.