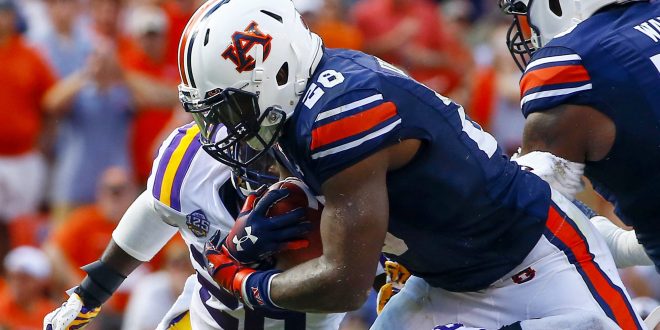 Auburn running back JaTarvious Whitlow (28) runs over LSU cornerback Kristian Fulton (22) for a touchdown during the first half of an NCAA college football game, Saturday, Sept. 15, 2018, in Auburn, Ala. (AP Photo/Butch Dill)

There was no time left to mount a comeback. The LSU Tigers finished the game and stunned the Auburn faithful, cementing themselves as a legitimate threat in the SEC.

As for the Auburn Tigers, they were handed their first loss of the season after a final-second field goal from LSU kicker Cole Tracy concluded the contest.

Now, the No. 9 Tigers (2-1, 0-1 SEC) will try and rebound against a team that is still looking for its footing under a new head coach. The Arkansas Razorbacks (1-2, 0-0 SEC), led by head coach Chad Morris, are coming into Jordan-Hare Stadium trying to pull off the upset.

Can the Razorbacks do it?

Through their first three games, not much has been pretty for Arkansas. After coasting in their first game against Eastern Illinois, the Razorbacks have been t

ripped up by their last two opponents. Taking losses to Colorado State and North Texas is a tough way to start out the season, but Morris said the demeanor of his team was up despite their blowout loss on Saturday.

“Our guys came out Sunday ready to go,” Morris said. “I wouldn’t have expected anything less. They came out (Tuesday) and we had a great practice. They were in tuned to everything that was going on in all phases.”

And that is the attitude Arkansas is going to need if they want to beat a top-10 team on the road. In order to maintain that intensity and turn some heads, the running attack is going to have spearhead the Razorbacks charge.

Junior Devwah Whaley has been the lead back of a team that is averaging over 170 yards a game on the ground. While these numbers come against non-SEC opponents, the promise of a running attack against a solid SEC defense could prove to be a positive for a team trying to find their identity under a new head coach.

But the focus for the Razorbacks isn’t on one main thing. Morris said the team just needs to get better on a daily basis and move from there.

“My focus is on what we can do with this football team right now and just getting better,” Morris said. “We gotta dig in a bunker and we just gotta work.”

Will Auburn avoid the upset?

The emphasis from Auburn head coach Gus Malzahn was rebounding. During the SEC Teleconference on Wednesday, the Auburn head man said the team has been “very focused” and are preparing for

“We’re expecting Arkansas’ best,” Malzahn said. “They’re a team with a new coach that we know is going to improve each week.”

One way Malzahn thinks the team can comeback from their loss is to limit the yellow flags thrown onto the field. Against LSU, the Tigers had nine penalties for a whopping 111 yards to their name. During LSU’s final drive that saw them win the game with a last-second field goal, Auburn committed two pass interference penalties. One of them came on a third and long play at the beginning of the series that extended the drive.

“We can’t beat ourselves. We’ve always taken great pride and we’ve been very disciplined in the past,” Malzahn said. “That was the tough one.”

Another emphasis Malzahn has referred to this week was the play of Auburn’s running game. Redshirt freshman JaTarious Whitlow broke out over the last two games, breaking the century mark both times. Malzahn said one of the keys to Saturday’s game will be the ability to tote the rock.

“I think it’s just a matter of being able to run the football and take advantage of what (the defense) gives you,” he said.

The game between the Razorbacks and the Tigers will take place Saturday night in Auburn’s stadium. You can catch the game on SEC Network with kickoff set for 6:30 PM.

Previous No. 2 Georgia heads to Missouri
Next Gamecocks Look to Shake off Rust Against SEC Rival Vanderbilt