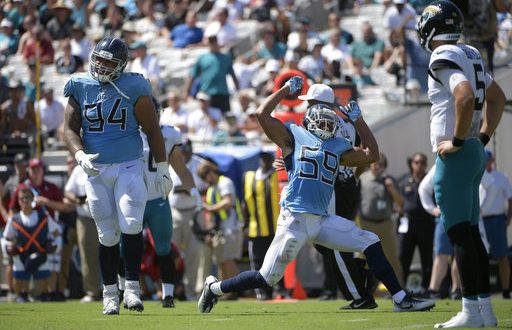 What a difference a week makes for the Jacksonville Jaguars. Last week, the Jaguars avenged their AFC Championship game loss to the New England Patriots. They impressed the country in the way they beat up the pride of the conference. Just a week later, the Jaguars looked like a completely different team, not in a good way. The offense struggled to find the end zone, which proved to be the difference in the team’s 9-6 loss to the Tennessee Titans.

Final from The Bank. #DUUUVAL pic.twitter.com/1Q3vgDCNKF

The Jaguars couldn’t get anything going offensively in this one. They finished the game with just 232 yards of offense and only 12 first downs. For Jaguar fans, the easy culprit of the team’s offensive inabilities is quarterback Blake Bortles. Just a week after posting four touchdowns against the Patriots, Bortles finished with 155 yards passing and zero touchdowns.

Bortles wasn’t given too much help on offense in Sunday’s loss. The Jaguars were without star running back Leonard Fournette, left tackle Cam Robinson and right guard A.J. Cann. The injuries on the offensive line led to the Titans defense to exploit the weak offensive line by sacking Bortles three times. The Titans keep Bortles in the pocket. They did so by keeping a spy on him. The defense was also successful at preventing the big pass plays, which worked out so well for the Jags just a week prior.

Desperate for an offensive spark, Jaguars head coach Doug Marrone called a fake punt on the team’s second drive of the game. The attempt was sniffed out by the Titans defense for no gain. This gave the Titans great field position, which led to the first points of the game on a field goal.

The Jaguar defense loves to sniff out turnovers. They forced three turnovers in the first two games. The Tennessee offense made it a point to keep the Jaguar defense from making any game-changing plays. The Titans’ ground attack wore down the Jacksonville defense. Tennessee racked up a total of 150 rushing yards.

The ground attack was powered by running back and quarterback Marcus Mariota. Mariota entered the game for Blaine Gabbert, who suffered a concussion early in the first quarter. Mariota, wearing a glove on his still injured right hand, finished the game 12/18 and 100 yards passing. He led the team on a 12 play, 65-yard drive to give the Titans the lead for good on a 28-yard Ryan Succop field goal with 4:06 remaining.

Then, the Titans were able to run the clock out thanks to a Mariota 15-yard first down run on third down with 2:31 left in the game.