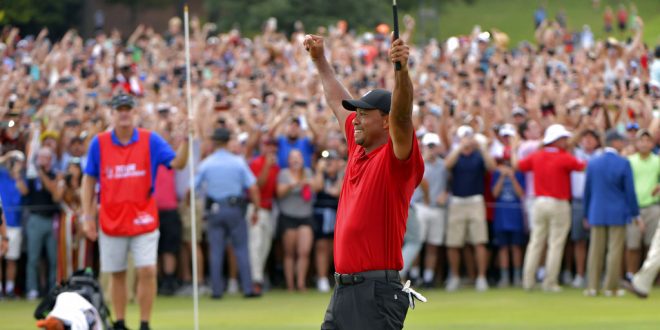 Tiger Woods celebrates after picking up his putt for par on the 18th green to win the final round of the Tour Championship golf tournament Sunday, Sept. 23, 2018, in Atlanta. (Hyosub Shin/Atlanta Journal-Constitution via AP)

For years, Tiger Woods was the face of golf, a game that has been around for centuries. Woods was dominant, and his wide grin and fist pumps were known around the world.

Through scandal, Woods fell from the heavens and into a slump that many thought he would never overcome. However, for the first time in years, Woods reminded people just how fun golf was when he is on top.

Woods capped off a phenomenal Tour Championship performance with his 80th career PGA Tour win, his first since 2013.

Recap of the Tour Championship

Tiger Woods was dominant from start to finish at Atlanta’s East Lake Golf Club. On the first day of the Tour Championship, Woods shot five-under-par, shooting an eagle on the 18th hole to cap off an already stellar performance.

Woods shot a 68 on day two of the tournament, then dominated the field Saturday by shooting another 65. Going into the final day, Woods was 12-under-par and held a three-stroke lead over the rest of the pack.

Sunday was a struggle for Woods, but he managed to shoot a 71, enough to hold off the surging Billy Horschel and Fed-Ex Cup Champion Justin Rose.

After the finishing off his par putt on the 18th hole to shoot 11-under-par, Woods finally regained that winning feeling.

Woods was emotional when he realized he would finally get that elusive 80th win, saying:

Woods also realizes the significance of this win, and what it means for the rest of his career. Woods isn’t a boisterous, young star golfer anymore. The 42-year-old Woods he’s closer to the end of his career than the beginning, saying:

The Tour Championship was the final tournament of the PGA Tour season. Even though the season is over, Woods will still play golf with the world watching.

He is scheduled to play golfer Phil Mickelson in a winner-take-all exhibition round of golf in Las Vegas. The round of golf between the two legends is a pay-per-view event that will take place Thanksgiving weekend.

Jonathan is a sports journalism student at the University of Florida. He enjoys videography, editing, photography, and writing.
Previous Offensive Struggles Prove Costly as Jaguars Suffer First Loss
Next Miami Dolphins Advance to 3-0 with Thrilling Win Over Oakland