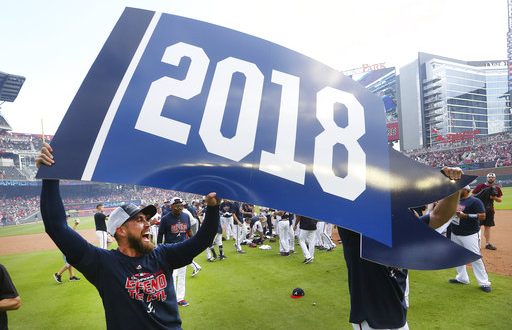 With just one week left of September baseball, the pennant races are coming down to the wire. Over the weekend, the Atlanta Braves clinched their first NL East title since 2013 after they defeated the Philadelphia Phillies on Saturday 5-3.

Veteran right-handed pitcher Mike Foltynewicz was on the mound for the Braves and had a no-hitter going into the seventh inning. However, once he left the game in the eighth with runners on first and second, the Phillies got on the board. Those runs didn’t stop his team’s momentum though, which led to a victorious post-game celebration.

Last season, the Braves went 70-92, and in fact, the Braves have had three consecutive 90-loss seasons. This year it was a different story though. Currently, the team is boasting an 88-68 record and are 20 games over 0.500. Heading into the series against the Phillies, they went 2-6 in series against the Washington Nationals and the St. Louis Cardinals. But that definitely didn’t put them down. The Braves went on to win three straight before they clinched the title.

After their win on Saturday, Skipper Brian Snitker spoke highly of his team and what they’ve had to overcome to get to this point.

Braves’ first baseman Freddie Freeman also had a lot to say amongst the celebrating. “This is the greatest feeling there is,” he said. But Freeman knows that the team still needs to buckle down and get the job done.

“The most important 11 wins are in October, so we need to take care of business still.”

The Boston Red Sox impressed many with their 2018 season and it was no surprise when they were the first team to reach 100 wins this year and the first to clinch a playoff spot, almost two weeks ago. On Thursday, Sept. 20, the Sox clinched the AL East after they beat the Yankees 11-6.

The Cleveland Indians clinched the AL Central almost ten days ago and this feat marks the Tribe’s fourth time heading to the postseason in the six years that Terry Francona has been the team’s manager.

The reigning World Series champions, the Houston Astros, clinched their playoff spot on Friday after they toppled the Los Angeles Angels 11-3. At the very least, the Astros clinched an AL wild-card spot, but now they have to worry about the Oakland A’s if they want to win the AL West.

On Saturday, the New York Yankees secured their spot in the postseason when they clinched an AL wild-card spot. This comes after they took down the Baltimore Orioles in extra innings, winning 3-2, and after the Tampa Bay Rays lost to the Toronto Blue Jays. This is also the second consecutive season that the Yankees have clinched a wild-card spot.

As for the NL West and Central titles, and wild-card spots, those are all still up in the air. It should be an intense week for the teams who are battling it out for an opportunity to make it to the postseason.

The Braves head up north to face the New York Mets for a three-game series beginning tomorrow night at 7:10 p.m. Touki Toussanint (2-1) will start for the Braves with Noah Syndergaard (12-4) on the mound for the Mets.

For Braves Country.
For our city.
For our fans.#ForEachOther pic.twitter.com/TdqBATTZoL