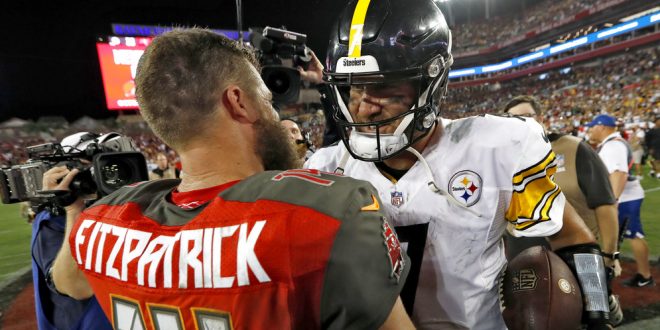 MNF: Fitz”Magic” Runs Out as Steelers Steal Their First Win

The Steelers finally put an end to Tampa’s hot start this past Monday night. They held on to a 30-27 win over the Bucs’ in Tampa. The Steelers defense held up a strong defensive performance despite the 27 points. They forced four turnovers and also combined for three sacks on the night.

There were many weird situations about this game in particular. Like, how Ryan Fitzpatrick threw for over 400 yards…for the third game in a row, becoming the first quarterback to ever do so in the history of the NFL. Or, how about the Steelers being penalized 13 times for 155 yards, most of them off of the new ridiculous roughing the passer rule. Or maybe even the fact that the Bucs’ almost rallied a comeback after Fitzpatrick’s terrible first half with three interceptions? Any of that can be considered odd, but we can all agree that it made the game more interesting to watch.

Roethlisberger completed only 61.7 percent of his passes on the road last year while throwing for 62.2 fewer yards per game than he did at home, according to CBSsports. Not to mention, Roethlisberger threw for 23 completions out of 41 attempts and was even picked off in three separate occasions in the season opener against the Browns in Cleveland.

But, he overcame a first half interception against the Bucs’ to finish the night off completing 30 passes out of 38 attempts for 353 yards and 3 touchdowns.

Then @AB84 did what he does best. pic.twitter.com/L4ywgV91J8

This stat line marks the first time in Roethlisberger’s career where he’s opened the season with 300-passing yards in three consecutive games.

Fitz”Magic” Had a Tough Game

Ryan Fitzpatrick has been on a tear this 2018 season. He’s been the talk of the NFL through weeks 1 and 2 but had to recover after three first-half interceptions. It looked like Fitzpatrick was back to his old self again but he came out guns-a-blazin’ in the second half. He finished with 411 yards with 3 touchdowns off of 30 completions in 50 attempts.

One of the main concerns for Bucs’ head coach Dirk Koetter was the pocket protection for Fitz. Heading into Monday’s game, Fitz was only picked off once this season, with games against the Saints and the Eagles under his belt. He was only rushed and sacked on 17.4% of dropbacks which was the lowest in the NFL. On Monday, he was sacked on 40.3% of dropbacks and was sacked three times, according to ESPN’s Jenna Laine.

However, starting quarterback Jameis Winston has been officially relieved of his suspension and will be yearning for his starting position. But, should the Bucs’ keep Fitzpatrick’s momentum going even after a loss? Or should they just drop the “lucky” success and bring Winston back into the lineup?

The NFL’s roughing the passer rule has gotten out of hand. Not only do the fans know it, but the quarterbacks have even admitted it, even with the rule being in their favor. Roethlisberger is one of those quarterbacks.

“I don’t want to criticize the officiating,” Said Roethlisberger. “especially when you’re talking about a penalty that helps the quarterback out. I was surprised at the first one. The second one I thought was legit. He hit me in the helmet. It was kind of like hearing that loud ring when your helmet gets hit.”

He also mentions how these penalties can be affecting the sport’s viewership.

“There are sure a lot of them. I can’t imagine the fans at home are enjoying it too much.”

The game featured four rouging the passer penalties, two by each team. This ties the record for most in a single game since 2001, according to ESPN’s Stats and Information.

The Steelers are hosting the 2-1 Baltimore Ravens in their second division matchup of the season on Sunday Night Football.

The Buccaneers will travel to Chicago to take on the 2-1 Bears.

Recent grad from the University of Florida. Editing all articles on here while helping out the newbies. Love all things basketball.
@@MarcoJMartinez_
Previous Fitzpatrick vs Winston: Who will be on the field?
Next Arizona Cardinals Name Josh Rosen Starting QB