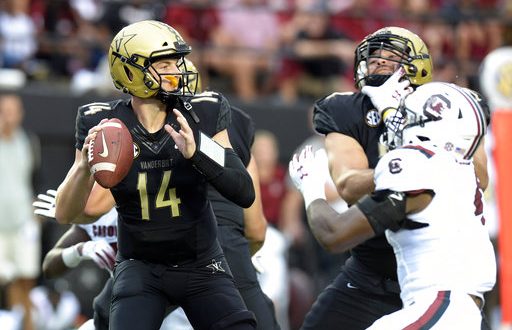 The Vanderbilt Commodores and the Tennessee State Tigers face off this Saturday in Nashville for an in-state matchup.

The Commodores have fallen to 2-2 on the season after losing to South Carolina last week. Vanderbilt head coach Derek Mason said it was a difficult loss for his team. However, Mason said his team has been hard at work in practice this week.

Vanderbilt has now lost two in a row, as they fell to Notre Dame in Week 3.

Tennessee State is 2-0 on the season. Saturday’s game against Vanderbilt will be the biggest challenge the Tigers have had to face so far. After beating Bethune-Cookman 34-3 in their season opener, the Tigers next two games were canceled due to inclement weather and Hurricane Florence. Their latest win came last week against Eastern Illinois, where they won a close game 41-40.

Vanderbilt will be without freshman wide receiver Cam Johnson for the remainder of the season. Johnson suffered a lower leg injury in last week’s game against South Carolina after the rain delay. Johnson had played in all four games of the season but will be able to enter next season as a redshirt freshman.

Didn’t expect my season to end this way, but I know my boys will continue to ball out and I’ll support them every step of the way! Thanks to everyone for the support, and kind words Vandy fans. Surgery went well. I’ll be back and on a mission next year! #AnchorDown ⚓️⚓️ pic.twitter.com/Y3HtB5CQVj

Tennessee State will likely be without one of its top receivers Saturday. Junior Chris Rowland suffered a chest contusion last week after making an awkward landing on a catch. The Tigers will also still be missing freshman Sabree Curtis due to a leg injury. Curtis sat out last week as well.

Vanderbilt and Tennessee State will kick off Saturday at 4 p.m. at Vanderbilt Stadium. The game will air on SEC Network.

Born and raised at the ballpark! Typically quiet- until it comes to sports. I'm a South Florida native with a passion for baseball nearly as strong as my faith. Grew up in garnet + gold, turned out sporting orange + blue. Likely to be found with a camera. And yes, I take food pictures.
@victoriarossman
Previous Jalen Hudson Plans to Solidify His Spot in the NBA Draft
Next Max Scherzer Picks up 300th Strikeout