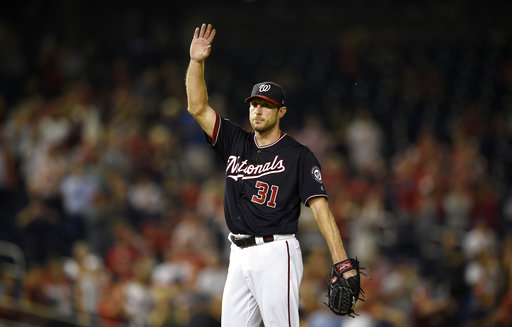 In many ways the 2018 season has been a lost cause for the Washington Nationals. However, last night Max Scherzer added to his already impressive Cy Young resume. Scherzer became just the 5th pitcher since 2000 to strike-out 300 batters in a season. He did so last night when he got Marlins outfielder, Austin Dean, to swing through a 3-2 slider for the second out in the top of the seventh.

Scherzer’s 300th K puts him in baseball’s elite company. The only pitchers to accomplish the same feat since 2000 were Curt Schilling, Randy Johnson, Clayton Kershaw and Chris Sale. Scherzer’s 300 strikeouts lead all of major league baseball. Justin Verlander is second with 280 for the Astros.

Many times as athletes approach milestones they try to ignore such accomplishment and focus on the task at hand. But the Nationals Ace said he couldn’t help but think about it.

“Yeah, it was on my mind, understanding what the milestone is. I definitely wanted to do it here at home,” Scherzer said. “The fans were an unbelievable support. When they’re standing on their feet going crazy, it gives you an extra adrenaline boost.”

Here are all 300 strikeouts from Max Scherzer's incredible 2018 season… pic.twitter.com/bruXySiFf0

Only ten pitchers in the history of Major League Baseball have won three Cy Young awards. Max Scherzer is looking to claim his fourth Cy Young award this season. On the year he leads the majors with 300 Ks. Tuesday night Scherzer picked up his NL leading 18th win and lowered his earned run average to 2.53.

Scherzer said he throughout his career he has never made 300 strikeouts a goal. Even so, as he realized his potential through the years he admitted he’s dreamed of reaching this milestone.

“I wouldn’t say it was a goal,” Scherzer said. “It was something as I solidified myself in the big leagues and showed I could get to those marks, it was something I dreamed of. I know how hard it is to consistently strike guys out.”

Scherzer’s milestone provided the Nationals a reason to celebrate after a disappointing 2018 season. Their 9-4 win over the Marlins improved their record to 80-78. Washington entered the year as the favorites to win the National League East but has been eliminated from postseason contention. Scherzer is expected to make one more start this season when the Nationals play Colorado in a three-game series this weekend.