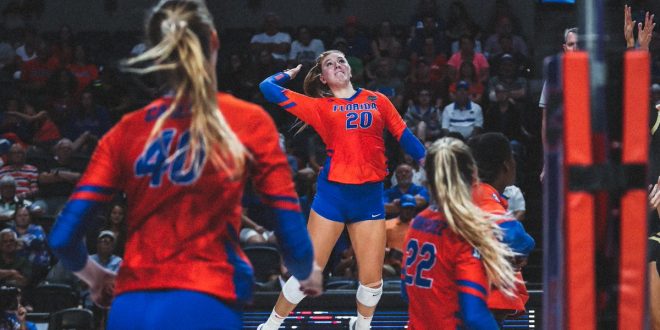 No. 11 Florida is traveling to Baton Rouge on Wednesday trying to extend their season-long winning streak to eight.

The Gators couldn’t have asked for a better start to the SEC season as they beat both Ole Miss and Mississippi State without dropping a set. Wednesday’s match will be LSU’s conference home opener. The Tigers dropped their first two conference matches to Georgia and South Carolina.

Like many other programs, LSU has had a hard time figuring out Mary Wise.

The Gators roster looks very different than the one that won the SEC championship and reached the national championship last season.

Florida is showing no signs that 2018 is a “rebuilding year” as a combination of new faces and old faces have kept the ball rolling from last season. The future is definitely bright as freshman Thayer Hall has been nothing but fantastic in her first season at UF. Hall came to Florida as the No. 1 volleyball recruit in the country and has shown why. She leads the team with 177 kills.

Hall is not the only fresh face contributing to the cause as Holly Carlton is enjoying her first season with the Gators. The transfer from North Carolina is right behind Hall in kills with 126 of her own.

It’s not all new faces leading the charge as the team has junior Rachael Kramer. She currently ranks seventh in the SEC in hitting percentage at .337 and fourth in blocks per set at 1.15. Kramer recorded eight blocks in a match earlier this season.

Last night, the No. 16 seeded Florida Gators defeated Florida A&M in the first round …