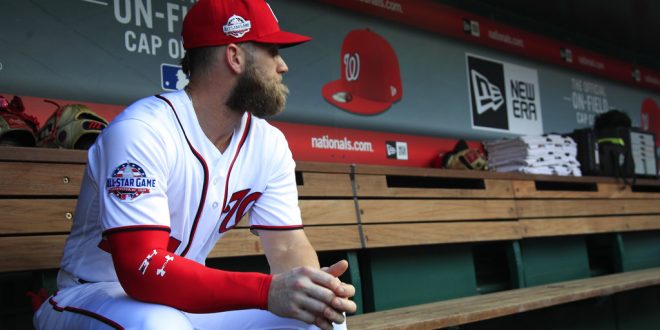 Washington Nationals Bryce Harper, looks at the baseball field from their dug out before the start of the Nationals last home game of the season against the Miami Marlins in Washington, Wednesday, Sept. 26, 2018. (AP Photo/Manuel Balce Ceneta)

Is Bryce Harper Saying Farewell to the Washington Nationals?

The Nationals took home a big win on Wednesday in their final home game against the Marlins 9-3. However, fans might have just said their final goodbyes to Bryce Harper along with it.

Hear from @Bharper3407 after his potential last home game with the #Nats. pic.twitter.com/VAzqffWP4p

Harper made his MLB debut with the Nationals in 2012 at merely 19-years old, but his time may be coming to an end as he is due to become a free-agent at the end of the 2018 MLB season. The 25-year old outfielder put on his white Nationals uniform more than three hours before the game started, but went 0 for 4, along with two strikeouts.

Before the game began, Harper spoke about his emotions going into what may be his last game in Nationals Park.

Reports claim that top prospect outfielder Victor Robles, could be Harpers replacement. On Wednesday’s game, Robles went 4 for 5, including a three run homer and a two run double. With Robles being a large addition to the team, the future of the Nationals team looks bright.

During his time in Washington, Harper went from 2012 National League Rookie of the Year to 2015 National League MVP, playing in more than 900 games. After a devastating season for nationals fans, could this be his final goodbye?