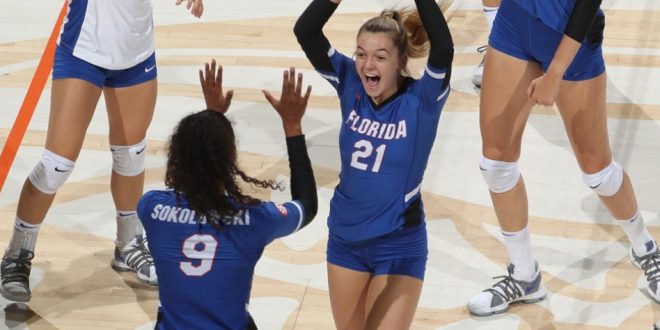 Gators Sweep Tigers on the Bayou

No. 11 Florida entered the Pete Maravich Assembly Center in Baton Rouge looking for their first conference road win on the season.

The Gators are now 3-0 in the SEC for the 24th time under Head Coach Mary Wise. They have now won eight consecutive matches since their upset loss to Northern Arizona during the Lumberjack Invitational.

How It Played Out

Florida started out by as many as five in the match’s first set. But, the Gators were able to notch the first set at 16 and then were able to pull away thanks to Thayer Hall, Rachael Kramer and Taelor Kellum.

They jumped out 17-11 in the third, but found themselves at 18 apiece after an LSU run. Hall took over and notched three kills over the next seven points to secure the victory.

Associate coach Dave Boos said the Gators had one of their worst defensive performances against LSU. He cited inexperience seeing LSU’s players by their younger players as a reason.

Hall led the way for the Gators offensively with 11 kills. She recorded her first double-digit kill game since Sept. 15. She finished the night with 11 kills, hitting at a .300 clip.

Holly Carlton recorded yet another double-digit kill match as well with 10 kills on .227 hitting while also picking up five blocks. It was her second double-digit kill performance in the Gators’s last three matches.

“Holly was uncharacteristically high-error to start to the match, but she leveled off and took some big swings that we need,” Boos said.

Kramer and Kellum both hit seven kills and were credited with nine blocks (Kramer: 5, Kellum: 4).

Moving Ahead to Bama

The Gators will head to Tuscaloosa for a Sunday match against the Alabama Crimson Tide.

“They’re a team that is very capable of knocking off any team in our conference,” Boos said.

Boos said the Wednesday and Sunday road matches will prove to be a good test for the Gators.

He said the Crimson Tide is well-coached and, like LSU, will come out doing things the Gators do not like. But, it is the Gators job to adapt.