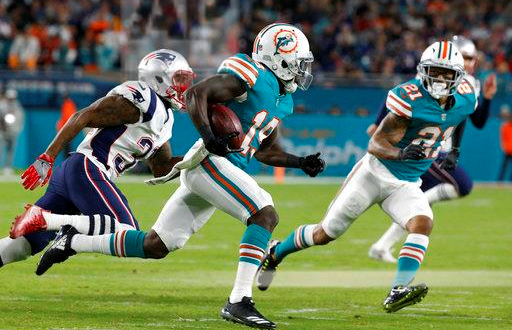 The Dolphins 3-0 and the 1-2 Patriots host the undefeated Fins for a Sunday afternoon game .

Fins Look to Improve upon 3-0 Start

This big AFC match up features the Dolphins who have been on quite a start to this season. They are on the road heading up to New England to take on Tom Brady and the Patriots.

The Dolphins have been making noise from the start of the season. They are being lead by their starting quarter back Ryan Tannehill who is ranked 4th among all NFL quarterbacks and has been helping his Dolphins win and setting the bar.

Miami offense has been looking very impressive from the start of the season.  They’ll look to keep climbing the ladder as they are ranked 23rd in the NFL for yards and 31st in play runs.

This will be the first time in a while that the Dolphins could possibly have their name mentioned about winning their division.

Will the Patriots step it up

The New England Patriots have not been on such a hot start to the season being 1-2; that’s not like the Patriots . Although it is very early in the season and unlikely that the stay at the same pace. Many don’t expect this type of start from the Patriots due to them running the AFC East since Tom Brady was drafted

It is only a matter of time before Tom Brady puts back on the jets and shapes back up the Patriots offense. It’s been nine years since another team besides the Patriots won the AFC East.

Tom Brady says they have not played the way they are capable of playing, loves playing division games like this because they teach and help you move forward on what has to be done to win. A lot of football is left. This is an important game and “we look up to” the Dolphins being that they are 3-0.

Brady says he does not always make the best choices but he is trying but you don’t get awards in the NFL  for trying so this week should be and interesting one.

New England’s defense has to step it up. The Dolphins offense are not one to play with especially being that they have been taking care of the ball on the offensive side. The Patriots rank 28th in the NFL for overall defense, while ranking 26th in passing yards.