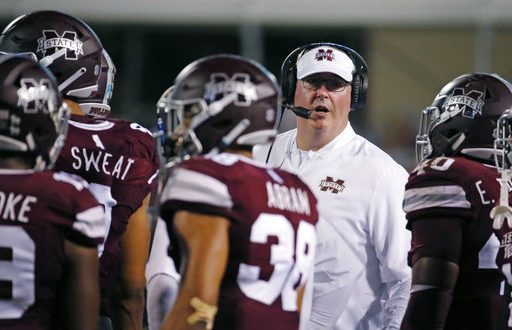 Mississippi State coach Joe Moorhead looks at his players during a timeout in the second half of an NCAA college football game against Florida in Starkville, Miss., Saturday, Sept. 29, 2018. Florida won 13-6. (AP Photo/Rogelio V. Solis)

SEC Preview: No. 8 Auburn travels to Starkville to take on MSU

The No. 8 Auburn Tigers (4-1) will travel to Starkville to face the Mississippi State Bulldogs (3-2). The Tigers are coming off a win against Southern Miss while the Bulldogs are coming off a home-game loss against the Gators. Game time starts at 7:30 p.m. EST on ESPN 2.

Auburn has had a near-perfect season so far, their defense, in particular, is stellar. The Tigers allow only 12. 6 points per game and are nationally ranked third nationally in scoring defense. In addition, Auburn is ranked 16th in total defense (304.6); seventh in turnovers gained (11); eighth in rushing defense (92.8); and 15th in pass efficiency defense (103.00).

From the offensive side, the Tigers are performing well. QB Jarrett Stidham and WR Ryan Davis are a dynamic duo: they are second in school history for the most productive pass tandem. However, Auburn head coach, Gus Malzahn says that their offense still has room for growth.

The Tigers hold a 7-3 record over the Bulldogs over the last 10 matchups which includes a 49-10 victory last season. Three of the previous eight games have come down to the final drive between these two teams. Auburn has an all-time 13-6-1 lead at Starkville. While the Tigers are historically the dominant opponent, Malzahn expects this to be a physical game, as Mississippi State and Auburn matchups are usually.

One thing Malzahn is worried about is Mississippi State’s loud noise in the Davis Wade Stadium. Bulldog fans are famous for ringing their cowbells to distract their opponents. Malzahn said the team is practicing this week with “crowd noise” to get players ready for Saturday. Earlier this year, the SEC made a rule banning artificial noise from the time the center puts his hand on the ball until it’s snapped during games. Malzahn said he’s working with his centers to make sure he gets his hand on the ball well before the ball is snapped.

Mississippi State Prepares for the Tigers

Despite, Auburn’s strengths, Moorhead said that he’s planning on incorporating more effective drives on offense so the Bulldogs can push past the Tigers’ defense.