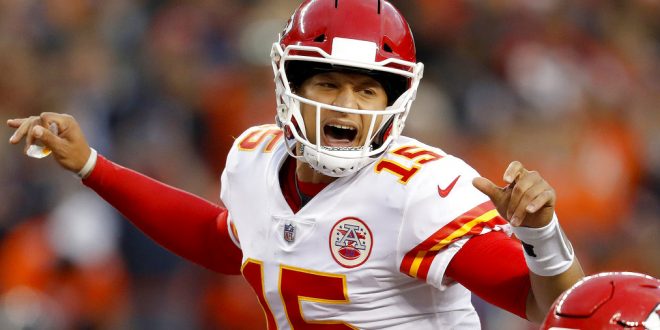 FILE - In this Oct. 1, 2018, file photo, Kansas City Chiefs quarterback Patrick Mahomes (15) makes a call against the Denver Broncos during the first half of an NFL football game, in Denver. Chiefs wide receiver Tyreek Hill called his quarterback slow. Their coach, Andy Reid, said his quarterback’s voice was “froggish.” And Patrick Mahomes insists he can dish the trash talk just as well as he can receive it. It’s all part of a unique locker-room banter that has helped keep things light as Kansas City rolls up win after win. (AP Photo/David Zalubowski, File)

No team is off to a hotter start to the 2018 NFL season than the 4-0 Kansas City Chiefs lead by quarterback Patrick Mahomes. The Chiefs are fresh off a thrilling 27-23 win over the Denver Broncos on Monday Night Football. But they won’t have much time to bask in the victory as they will welcome the 3-1 Jacksonville Jaguars to Arrowhead Stadium this week.

The 23-year-old Mahomes couldn’t have asked for a better start to his 2018 season.

He was named AFC Offensive Player of the Month after leading the NFL in touchdowns (14) and passer rating (137.4). Also, his 13 touchdown passes through the first three weeks of NFL action was the most to start a season in NFL history.

Mahomes also has yet to throw an interception.

He highlighted Kansas City’s fourth-quarter comeback on Monday at Mile High Stadium. A two-yard touchdown pass to tight end Travis Kelce from Mahomes brought the Chiefs within three points. He then led the team down the field to set Kareem Hunt up for the go-ahead touchdown run with 1:39 left in the game.

Kansas City is the highest-scoring team in the NFL heading into a matchup with one of the top defenses in the league.

The Jaguars have only allowed three touchdown passes this season. Two of those were thrown by Tom Brady in Week 2. Jacksonville has surrendered just four total touchdowns on the season.

This stout Jaguars defense has embraced the challenge of slowing down the hottest team in football.

We face the NFL's best offense on Sunday.

Our players are up for the challenge. pic.twitter.com/czU5NsHr0M

Coach Doug Marrone announced on Wednesday that Leonard Fournette will miss Sunday’s game due to a lingering injury to his right hamstring.

The running back first suffered the injury late in the first half of Jacksonville’s season-opener against the Giants. He aggravated the injury in the team’s 31-12 victory over the New York Jets last Sunday.

The Chiefs’ run defense, which struggled to contain Phillip Lindsay and Royce Freeman on the road last week, could benefit from Fournette’s absence.

Kickoff between the Jacksonville Jaguars and the Kansas City Chiefs is at 1:00 p.m. Sunday at Arrowhead Stadium.